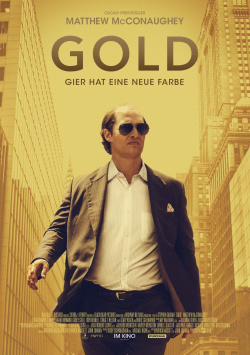 For generations the family of Kenny Wells (Matthew McConaughey) has been making money exploiting natural resources. When Kenny takes over Washoe Mining Corporation from his father, the company founded by his grandfather, he faces a rosy future full of wealth. But it doesn't come to that. After seven years the offices are gone, the money is used up and Kenny tries to keep his head above water with dubious shops. When the geologist Michael Acosta (Edgar Ramirez) suspects a large gold deposit in the depths of Indonesia's jungle, Kenny senses the chance of his big comeback. After bitter setbacks, the two men actually find gold and thus put the stock market into a state of excitement. Suddenly the name Washoe Mining Corporation means something again and for Kenny and Michael the money literally bubbles up. But happiness should not last long…

Inspired by a scandal about the Canadian exploration company Bre-X in the 1990s, director Stephen Gaghan and screenwriters Patrick Massett and John Zinman spun a satirically interwoven story about the narrow border between greed and madness. The plot was moved to the USA in the 1980s and a fictitious main character was created with Kenny Wells. Thus "gold" interweaves fact and fiction into an entertaining economic thriller that is first and foremost one thing: a vehicle for Matthew McConaughey. With great courage and ugliness, the Oscar winner once again delivers a really good performance. He makes Kenny a tragicomic character who can reveal some very interesting facets in the course of the story.

McConaugheys Speil and that of his co-stars, especially Edgar Ramirez and Bryce Dallas Howard, is also the one who comforts over the weaknesses of the somewhat unbalanced production. Gaghan often remains too hesitant and therefore can't create a similar strong pull as Martin Scorsese did in "The Wolf of Wall Street" - even if you can only compare these two movies superficially. The story, as interesting as it may be at its core, often only bobbles along without offering any real dramaturgical highlights. When they come, the whole thing works really well, is extremely thrilling and entertaining. However, there are just too many tough moments and nice, but somehow also irrelevant lengths, which stand in the way of a positive overall impression.

No question, "Gold" is a good movie overall. The convincing 80's look, the at times pleasantly biting humor and the very good actors alone are enough to make the movie "worth seeing". The reference to the current economic situation also makes the story very interesting - especially since it is not pure fiction. But apart from the many positive aspects, there are also the aforementioned points of criticism, which is why the "worth seeing" must be preceded by a "with restrictions". But if you want to see McConaughhey with a bald head and a nasty place, don't miss this movie!