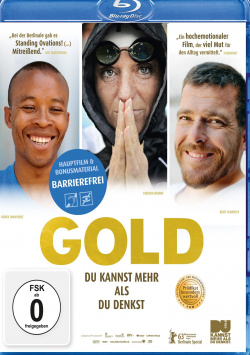 GOLD - You can do more than you think - Blu-ray

Content: For a long time the Paralympics were always in the shadow of the Olympic Games. Often the athletes fighting for medals here had to do so before half-empty ranks - not to mention a stepmotherly treatment of the TV broadcast. However, over the last few years, the Paralympics have also increasingly experienced the esteem and attention that this competition and its athletes deserve. In London, not only the 2012 Summer Olympics but also the subsequent Paralympics were a real event in which thousands of spectators fevered along with the extraordinary athletes. Three of these athletes were Henry Wanyoike, a blind marathon runner from Kenya, the paraplegic swimmer Kirsten Bruhn from Germany and the Australian wheelchair racer Kurt Fearnley.

The filmmaker Michael Hammon accompanied these three exceptional athletes with his camera for one year. From the preparations for the Paralympics to the competitions, he was at their side, watching their daily lives and talking to them about their lives. The result is the documentation "GOLD - You can do more than you think", which doesn't focus on the competitions and the gold medals the athletes are striving for. Rather, Hammon tries to show through the very sensitively drawn portraits that you can be a winner even if you don't win the actual competition.

When you watch the three athletes training or experience in the very open conversations how not only they, but also their families have learned to deal with the disabilities, then it becomes clear what these people have already achieved before the competitions in London started. Very positive is the fact that director Hammon renounces exaggerated sentimentalities. There are indeed very emotional moments, such as when Kirsten Bruhn tells us in tears how difficult it was for her, after her accident, to free herself from a deep hole and to regain courage and strength in order to start playing sport again. But the viewer doesn't feel emotionally manipulated in such moving moments, which could easily have happened with this topic.

"GOLD - You can do more than you think" can convince not only as a thrilling sports documentary, but also as a portrait of three very impressive people. The film is entertaining, amusing, moving and inspiring in equal measure. And despite some small lengths there is one more than deserved for it: Worth seeing!

Picture + sound: The audiovisual realization is on a good level for a contemporary documentation. While the sound is mainly determined by the well mixed voices, the restrained music and some ambient noises, the very clean picture pleases with a harmonious colouring and a high overall sharpness, which shows some quality losses only with faster camera pans. Good!

Extras: As a bonus the disc offers a good Making of (ca. 16:59 min.) and some Deleted Scenes (ca. 24:33 min.). Like the main film, the extras are also presented barrier-free in German and English.

Fazit: "GOLD - Du kannst mehr als du denkenkst" is a thrilling documentary about three exceptional athletes and the power of human will. It's also a very moving movie, but it never makes use of intrusive sentimentality. A slightly different sports documentation that is absolutely worth seeing despite the small lengths. The Blu-ray presents the film in good picture and sound quality and also has some worth seeing extras to offer - all of course barrier-free! But there is a very clear one: Recommendable!