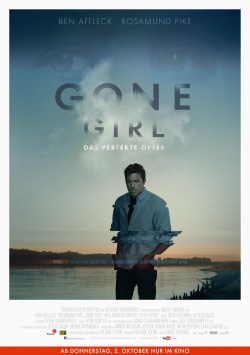 In the beginning it was the big love between the aspiring writer Nick Dunne (Ben Affleck) and the charming and beautiful Amy (Rosamund Pike). But after five years of marriage, all passion seems to be extinguished. Nick and Amy are just bitching and avoiding spending time together. But that is already a reason for a crime. This question is posed not only by the police, but also by the entire media landscape, when Amy disappears one day without a trace. Although everything looks like a kidnapping at first, there are growing signs that Nick might have murdered his wife. The case becomes more and more a media spectacle and Nick the most hated man in America. The secrets that come to light about him are not exactly conducive to his assertion of innocence. But is the truth really as clear as it seems?

With "Gone Girl - The Perfect Victim", the film adaptation of the bestseller of the same name by Gillian Flynn, director David Fincher once again turns to the thriller genre. Of course, his latest work will be compared to his earlier works like "Seven", "Zodiac" or of course "Fight Club". And then one is quickly tempted to dismiss "Gone Girl" as a comparatively conventional mass product. Surely, Fincher's typical handwriting is already clearly recognizable in the visual realization alone. Nevertheless, at first glance his new film isn't characterized by original and shocking twists. Even if you don't know the book, you'll know what really happened to Amy after the first hour at the latest.

Nevertheless the whole thing works extremely well - even if you already know the original novel. Because "Gone Girl" isn't just a thrilling thriller, but also a thrilling marriage psychodrama, which as a combination of Fincher's dense staging and the outstanding play of the two main actors offers first-class entertainment until the controversial end. Ben Affleck can once again prove that he can really act despite all criticism. And Rosamund Pike embodies the different facets of her character so perfectly that a nomination for the Oscar would be more than justified here. For all those who have not read the book, of course not too much should be betrayed here. But let's say this much: the former Bond-Girl is just at her best when she's not playing the charming woman with whom the audience just like Nick likes to fall in love at the beginning.

When it becomes clear whether Nick killed his Amy or not, the story doesn't lose any tension. Because Fincher now perfectly manages to turn the whole thing into a bitterly evil psychodrama, which he then spices up with a good dash of media satire. Accompanied by the atmospheric music of Trent Reznor and Atticus Ross, the almost two-and-a-half hours of the album are barely noticeable. Regardless of whether one is enthusiastic about the story or not, there is no question that the film offers great cinema in terms of craftsmanship and acting. Only at the finale will the spirits divide, as was already the case with the book, and rightly so. Although there are some minor changes, Fincher and Gillian Flynn, who also wrote the script, kept the actual end of the book. And one is easily tempted to dismiss the finale as hasty, unimaginative and unsatisfactory. But on closer examination, some doubters might also realize that the story actually couldn't have gotten a more uncompromising and evil ending missed. And so the film fits perfectly into the oeuvre of David Fincher.

If you can be captivated by the story, then "Gone Girl - The Perfect Victim" is a really outstanding psycho-thriller and a bitterly evil marriage drama, which would be a deserved Oscar candidate in several categories. A great movie, for which there is a very clear "absolutely worth seeing" and which you can forgive even the cleverly braided surreptitious advertising for Netflix (the streaming service for which Fincher produces the series "House of Cards").