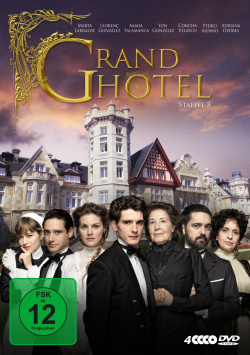 Content: The events in the Grand Hotel are overturning. After Julio (Yon González) and Alicia Alarcón (Amaia Salamanca) found the secret room where the man who attacked Andrés (Llorenc González) was, they get closer and closer to the mystery of the mysterious stranger. But when Alicia follows a hot lead and is accompanied by Don Diego (Pedro Alonso), who becomes more and more suspicious, he is injured life-threateningly during an attack. This means that Julio's chances of finally winning Alicia's heart are much worse again. In fever madness, Don Diego hallucinates and gives Alicia important clues as to what actually happened to her father the night before his death. Slowly Doña Teresa (Adriana Ozores) is also threatened by a thinning of the air, especially since Alfredo (Fele Martinez) is now finally threatening to turn away from the Alarcón family, after he has found out that Sofia (Luz Valenebro) has lied to him all the time. And the fact that the murderer returns with the golden knife also poses a great threat to the reputation of the hotel. But Doña Teresa once again knows how to intrigue her way out of the diciest situation. And so there seems to be no justice behind the pretty facade of the Grand Hotel - and no chance for love between Julio and Alicia...

The third season of "Grand Hotel" continues the concept of the Spanish series consistently. The well-equipped soap combines elements of the classic telenovela with romance, thriller and humour in an entertaining way. Yet the crime thriller part in the fourteen new episodes, in which the truth about the last days of Alicia's father is the focus, is clearly increasing in comparison to the earlier episodes. For there is not only the mysterious stranger who sought Andrés' life and who seriously injures Don Diego. There are also several murders, not all of which can be attributed to the killer with the golden knives. Its identity is revealed here in a dramatic way, which brings one of the many storylines to a satisfactory conclusion.

In other moments the series keeps spinning in circles in order to prolong the action even further. Whenever Julio and Alicia are one step closer to the hotel's great secrets, they throw back a new event. And even when Alfredo tries to break away from the Alarcón family, you can no longer really count. Sometimes the twists the authors have come up with almost border on involuntary comedy and are not always comprehensible. The way Doña Teresa reacts to being excluded from a new exclusive community of first-class hotels, for example, is far-fetched and a little silly.

This doesn't harm the entertainment value of the series, though. Especially since the rather humorous aspects, which are primarily at the expense of Chaos son Javier and the policeman duo, lend the series a pleasant self-ironic touch whenever it threatens to take itself too seriously, which increases the fun factor considerably. So if you've already become addicted to the first two seasons and love high-gloss soaps with a lot of heart, excitement and drama, you should definitely stop by the "Grand Hotel" a third time. Worth seeing!

image + sound: Compared to the first two seasons nothing has changed here. The picture of the DVD convinces in most scenes with a pleasantly high picture sharpness and a powerful, very warm colouring. Some small details sometimes seem a bit blurred, but overall a positive overall impression prevails for a TV production. The stereo mix of the sound concentrates primarily on the dialogues and the music, but from time to time small sound effects and ambient noises also provide some dynamics on the sound carpet. Good!

Extras: As a bonus the DVD has only some program tips to offer.

Fazit: In the third season of "Grand Hotel" the events become more and more dramatic. There's murder, intrigue, betrayal and deception. There are great revelations, disappointed love relationships and secret affairs. Spiced with a little bit of humor, some tension and a lot of romance, the 14 new episodes are again beautifully filmed soap entertainment at its best. Who already liked the first two squadrons, can't pass this box either. Recommended!