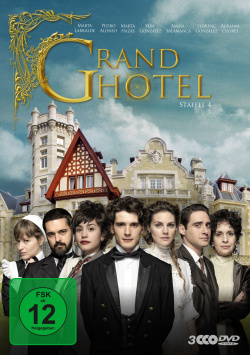 Content: After the devastating explosion during the big New Year's Eve celebration there is not only extreme damage to the Grand Hotel. The attack has also caused many injuries and some deaths. While Julio (Yon González) is briefly struck down by an injury, his lover Alicia Alarcón (Amaia Salamanca) disappears without a trace from the hotel. Her husband Don Diego (Pedro Alonso) suspects that she was kidnapped. With the unexpected help of Julio and Commissioner Ayala (Pep Anton Muñoz), Don Diego manages to free Alicia from the hands of her tormentors. But this is not the end of the nightmare. With the help of her friend, the lawyer Maite (Megan Montaner), Alicia wants to annul her marriage with Don Diego. But Diego wants to prevent that at all costs. When Alicia tries to elope with Julio, the horned Don Diego takes drastic measures to stop the loved ones. Meanwhile Andrés (Llorenc González) has to find out that his lover Camila (Andrea Trepit) was pregnant and lost the baby at birth. Now she fights for her life herself and gets help from Belen of all people - but she has a murderous plan...

Head of the family Doña Teresa (Adriana Ozores) are plagued by other worries. After losing the hotel to Don Diego, she sees her entire existence in ruins. The only way out could be to marry her son Javier to a wealthy bride. But good-for-nothing Javier falls in love with the nurse Laura (Marta Hazes) just now. Don Diego also wants to sell the hotel to the wealthy Beatriz (Cristina Brando). Is this the end of the Grand Hotel?

The fourth season of "Grand Hotel" is also marked by intrigues, secret love, murder and power struggles. And, of course, Commissioner Ayala and his incompetent colleague have a lot to do again. While some of the new storylines work out quite well and fans of the first three seasons are entertained very well, the series is going round and round in other moments. Especially the secret romance between Julio and Alicia slowly takes on unintentional comical traits. Also, the fact that there are always documents that have to appear or be found to convict Don Diego or Doña Teresa of a crime - which in the end doesn't succeed - is a heavily overused plot element after four seasons.

However, whenever the series doesn't take itself too seriously, as in the plot strand around Javier's relationship with Laura, or when the familiar pattern is varied a little, the series also works very well in the penultimate season. The beautiful pictures, the scenery of the hotel, which was very impressive even after the explosion, the costumes and of course the numerous soap elements, which give the series its high addiction factor, make season 4 a real must for all fans. And since the season of course ends with a cliffhanger again, the final episodes actually can't come fast enough. Worth seeing!

Picture + sound: When it comes to picture and sound quality, everything stays the same. The picture of the DVD convinces in most scenes with a pleasantly high picture sharpness and a powerful, very pleasant colouring. Especially in darker scenes some small details are a bit blurred, but overall a positive overall impression prevails for a TV production. The stereo mix of the sound continues to focus on the dialogues and the music, but now and then small sound effects and ambient noises also provide some dynamics on the sound carpet. Good!

Extras: As a bonus the DVD has only some program tips to offer.

Fazit: In the fourth season of "Grand Hotel" there are again many new intrigues, new love affairs, new murders and many new secrets. While the relationship between Julio and Alicia turns too much in circles and thus begins to take on unintentionally funny traits, some of the new storylines manage to keep the entertainment value of the series at the usual level. The DVD box presents the episodes of this fourth and penultimate season in appealing picture and sound quality. Only on extras fans hope also with this box again in vain. All in all: Those who already liked the first season will not regret the purchase of this fourth season. Recommended!