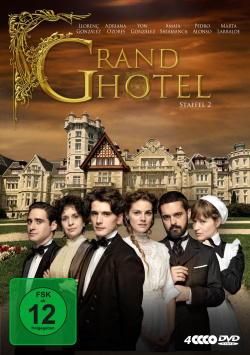 Content: The "Grand Hotel" opens its doors for the second round: four months have passed since the dramatic events of the first season. Actually Julio (Yon González), after his great love Alicia Alarcón (Amaia Salamanca) married Don Diego (Pedro Alonso), wanted to leave the hotel and return to his mother. But after his best friend Andrés (Llorenc González) has been in a coma since the electric shock that turned out to be an attack on his life, Julio simply doesn't want to leave his side. When he wakes up again, his mother and pregnant Belén (Marta Larralde) are very happy. But Doña Teresa (Adriana Ozores) and Don Diego would have preferred their servant to die, as they both know a secret they want to keep secret at all costs - whatever the cost. When Alicia returns from her honeymoon, it doesn't take long for the old feelings between her and Julio to flare up again. But there's no time for love sorrow. The two of them uncover a secret that seems to be directly related to the death of Alicia's father a year ago. But who's going after Andres? What will become of Belén's child? Did Alicia's father really die of natural causes? And will Julio and Alicia find each other again?

The second season of "Grand Hotel", shot again in front of the picturesque backdrop of the Palacio de la Magdalena in Santander, Cantabria, continues the dramatic style of the series consistently. With a great set and beautiful pictures a story is told about love, intrigue, murder and jealousy in the best telenovela tradition. But in direct comparison to the first season there are also some changes. While the dramatic part of the story is told more and more pointedly and thus threatens to drift into the involuntary comedy, the makers also grant the audience more intentionally humorous moments than in the first episodes. These are primarily due to the police officer duo, whereby the degradation of the committed commissioner after the events of the last season and thus the rise of his rather clumsy assistant to his superior provide much comic potential.

There are some things that are used a little too often. There is, for example, the fact that the employees in the hotel, in which supposedly there is always so much to do that there is no time for leisure, can always hang around in the hotel corridors long enough to observe suspicious actions, discover forbidden flirtations or listen to conspiratorial conversations. Or that Julio still has time to look towards Alicia even in the most difficult situations. That's very effective, but in the long run it's almost ridiculous. It is also not very credible that a baby can be hidden permanently in a chest without screaming loudly or even suffocating.

However, weaknesses of this kind should not be taken too hard to court. After all, especially in the second season, the series always shows something like self-irony and doesn't try to be more than it is. The makers are well aware that they don't offer more here than a classic soap with all its usual ingredients, which have only been made a little prettier by the equipment, costumes and locations. And the scriptwriters know how to handle these ingredients very well, because in the end they missed the series despite its weaknesses an enormously high addictive factor, which doesn't decrease even if the action is a bit overdone.

Those who have already been feverishly involved in the first season and who have been in the mood for it, will also enjoy this box again. Because visiting the "Grand Hotel" is simply fun, even if the series may not be a highly intellectual masterpiece. And that's why there's a very clear one again for this speaker: Worth seeing!

Picture + sound: Compared to the first season, nothing has changed here. The picture of the DVD convinces in most scenes with a pleasantly high picture sharpness and a powerful, very warm colouring. Some small details sometimes seem a bit blurred, but overall a positive overall impression prevails for a TV production. The stereo mix of the sound concentrates primarily on the dialogues and the music, but from time to time small sound effects and ambient noises also provide some dynamics on the sound carpet. Good!

Extras: As a bonus, the DVD only has a few program tips to offer.

Fazit: "Grand Hotel" offers entertaining soap entertainment in impressive scenery, beautiful costumes and a lavish outfit also in the second season. However, the scripts sometimes take on unintentionally funny traits, which doesn't change the still high addiction factor of the series. Besides some clichés and a lot of kitsch there are also some really exciting, stirring and beautiful moments that make these new episodes absolutely worth seeing again for fans of the first season. The DVD presents the series in good picture and sound quality, but the viewers also have to do without bonus material this time. All in all: if you already have the first box on your DVD shelf, you shouldn't leave season 2 in the store. Recommended!