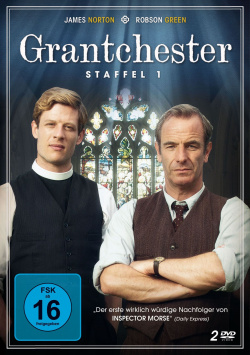 Contents: Grantchester in 1953: The young vicar Sidney Chambers (James Norton) receives an unusual order from the widow of a deceased parishioner to prove that her husband did not commit suicide but was the victim of a crime. His investigations call on the local police commissioner Geordie Keating (Robson Green), who actually doesn't like to see anyone messing with his craft. But soon he has to realize that Sidney has a real talent for finding out about murderers and other criminals. And while the unequal duo solves one case after another, a true friendship develops between them…

Based on the novel "The Shadow of Death: Sidney Chambers Investigates", "Grantchester" tells classic crime stories against an idyllic backdrop. The film was not shot in the studio, but directly in Grantchester in the English county of Cambridgeshire. With the help of a great and very detailed equipment and suitable costumes the village was transported perfectly into the 50s. In the authentic setting, the series tells timelessly good stories, which may not be particularly surprising, but are extremely entertaining.

That's also due to the fact that the two main characters are drawn very interestingly and played great by their actors. Sidney Chambers is truly not the typical clergyman. He loves women, has a soft spot for jazz and is not averse to alcohol. The Second World War also left its mark on him - as did Geordie Keating, which reinforces the bond between the two otherwise very different men. It's just fun to watch the two of them investigate.

But also the side characters like the resolute housekeeper Mrs Maguire (Tessa Peake-Jones) or Sidney's secret love Amanda (Morvern Christie) help to lift the series above the average of this genre again and again. With a good mix of humor and drama and a thrilling development of characters throughout the episodes, this first season of "Grantchester" is British thriller entertainment par excellence. In Great Britain season 4 is now running - so supplies are secured! Thank God!

Picture + Sound: The picture captures the 50's feeling of the series well and shows off the many beautiful details of the equipment as well as the beautiful landscape. The picture is clean, the overall sharpness is on a good level and real weaknesses can hardly be found even in darker scenes. The Dolby Digital 5.1 mix is rather unspectacular, but can score here and there with some good surround moments. Good!

Extras: There are some nice extras on the second disc. We start with a very interesting Making of (approx. 12:37 min.), which despite its rather short running time offers a lot of information about the creation of the series. In addition there are short insights behind the scenes (approx. 3:47 min.), whereby it concerns clips, which are to be seen in shorter form already in the Making of. A last short feature deals with the women in Sidney's life (approx. 2:55 min.). Not really much, but really worth seeing!

Fazit: The first season of "Grantchester" is British thriller entertainment at its best, with great actors, a great outfit and exciting stories - spiced with a little bit of humour. Technically the first season is well done and on the second disc there are some nice extras. All in all there is a deserved one for it: Absolutely recommendable!