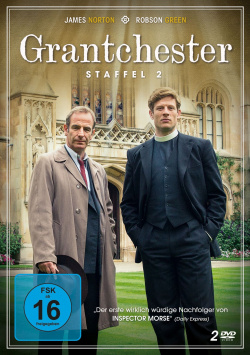 Content: Grantchester in 1954: The young vicar Sidney Chambers (James Norton) has left the traumatic experiences of the Second World War behind him and is not least satisfied with his contemplative life in Grantchester through his friendship with the local police commissioner Geordie Keating (Robson Green). This suddenly changes when Sidney is accused by the father of 15-year-old Abigail of sexually harassing his daughter. The case takes a dramatic turn when the girl is found dead. Although Sidney manages to exclude himself from the circle of suspects, this case will change him forever - not least because his friendship with Geordie is put to a severe test by completely different views on the subject of justice…

Welcome back to Grantchester. The crime series "Grantchester", based on the novel "The Shadow of Death: Sidney Chambers Investigates", builds heavy hurdles between the two main characters in the new episodes. On the one hand it becomes clear how important the friendship between the two men is, but at the same time also how different their characters are. That makes this season a little darker and more complex than the first episodes. Especially when the issue of the death penalty drives a real wedge between Sidney and Geordie, it becomes clear how different their views are. The future of the series will show whether this can be overcome.

But also the handling of other topics, such as homosexuality in the 50s, makes the new consequences profound, interesting and also very exciting. Fortunately, the makers also add a little bit of humor and lightness, so that the whole thing doesn't get too dark and heavy. Especially in the last two episodes of this season there are some very difficult moments, but still season 2 is a great crime thriller overall. The fact that at the same time one is also inspired to think and can mate with the fate of some beloved characters over several episodes makes the overall impression even more positive than it already was.

The great actors, the detailed equipment and the really good scripts make "Grantchester" even better in the second year than in the first episodes. A thrilling journey into the past, which still deals with relevant topics in a pleasantly entertaining, but never superficial way - that's what it's all about: Absolutely worth seeing!

Picture + sound: The picture captures the 50's feeling of the series well and shows off the many beautiful details of the equipment as well as the beautiful landscape. The picture is clean, the overall sharpness is on a good level and real weaknesses can hardly be found even in darker scenes. The Dolby Digital 5.1 mix is rather unspectacular, but can score here and there with some good surround moments. Good!

Extras: There are some nice extras on the second disc. In short featurettes, actors and makers comment on their return to "Grantchester" (approx. 2:04 min.) and on the tensions between Sidney and Geordie (approx. 2:31 min.), which in the second season put the relationship between the two men to a hard test. In addition there is a short Making of (ca. 10:16 min.) and interviews with the actors and makers (ca. 16:21 min.)!

Fazit: The second season of "Grantchester" puts the friendship established in season 1 between the clergyman Sidney and the policeman Geordie to the acid test again. Beside closed criminal cases there is also a big case, which runs through the whole season and leaves traces at Sidney. A few lighter moments make sure that the six episodes don't seem too gloomy. Important topics and moral questions are treated entertainingly, which also makes this double DVD absolutely recommendable. Short but worth seeing extras are also available!