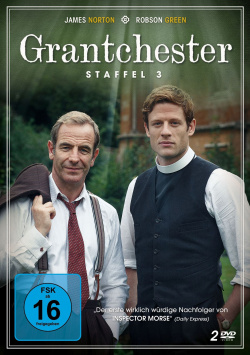 content: Grantchester in 1955: The young vicar Sidney Chambers (James Norton) has a difficult decision to make: He has to choose between a life at the side of his great love Amanda (Morven Christie) or his calling as a clergyman. During this difficult time he also finds support from his friend, police commissioner Geordie Keating (Robson Green), with whom he has to solve some new crimes. However, when he accidentally finds out about a secret of the policeman, this becomes a severe test for the friendship between the two.

The crime series "Grantchester", based on the novel "The Shadow of Death: Sidney Chambers Investigates" is entering its third round. In the process, the characters are consistently developed further, which of course also has an impact on the friendship between Sidney and Geordie. But the central theme of the season is Sidney's inner conflict. He has to make a decision that is actually impossible - because no matter which way he chooses, he will never be 100% happy. Either he loses the love of his life, or he loses the faith that has given him so much support over the years. </But there are also some happy endings, for example for Mrs Maguire (Tessa Peake-Jones), who gets a very special moment in the final episode of the season. A ray of hope in a finale that sets the stage for big changes in Season 4 - changes that some fans will find very difficult. But even if that's the case, the makers of Season 1 have to be credited for consistently following the path they took in Season 1 until here - even if this will have some unpleasant consequences. </p>

Besides the personal developments of the characters there are of course the various criminal cases. Here, too, the series offers the usual high quality. Admittedly, this is at times rather conventional, but always thrilling and thrillingly implemented. Moreover, Daisy Coulam, who has written most of the scripts of the series since the beginning, manages to surprise the audience a little bit. Great actors, an atmospheric set and a well-balanced mix of suspense, drama, romance and humour make this season again a feast for all lovers of British crime entertainment. Absolutely worth seeing! </The audiovisual realization of the series is on a similar level as in the previous seasons. The picture is also very clean in the new episodes, the overall sharpness is on a good level and real weaknesses can hardly be seen even in darker scenes. Moreover, the color scheme captures the atmosphere of the series very well. The sound is in a rather reserved Dolby Digital 5.1 mix, which can score with some good surround moments in places, though. Good! </p>

Extras: On the second disc there are some nice extras, consisting of a short Making of (ca. 9:58 min.), as well as several interviews with actors and makers of the series (ca. 13:18 min.). Good!

Conclusion: The third season of "Grantchester" offers as usual good crime entertainment, but is especially characterized by the good character development. As the relationship between Sidney and Geordie takes a new direction due to the complicated life circumstances of both men, the series remains thrilling and surprising in its third year. The finale prepares big changes for the fourth season, which will surely break some fans' hearts. In addition to the six episodes, the double DVD also offers almost 25 minutes of bonus material. All in all, there is also a lot of bonus material here again: Absolutely recommendable!