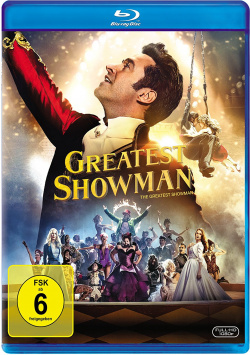 Film: P.T. Barnum is considered by many to be the father of modern entertainment, the pioneer of the realization of dreams. Legendary was his circus, which had to close in 2017 after well over 120 years. P.T. Barnum was much more than that. He was a master of marketing, which does not make him an undisputed person. The fact that he exploited his artists and partly presented them as "curiosities" can certainly be reproached him. But there's no question that the entertainment industry would look different today without the Greatest Showman. And that's why Michael Gracey's feature film debut can be forgiven for taking a transfigured and over-embellished look at the fabulous circus world of P.T. Barnum.

The cinema musical filled with catchy pop songs shows Barnum (Hugh Jackman), a man driven by his visions, freeing himself and his wife Charity (Michelle Williams) from bitter poverty when he buys a curiosity cabinet in New York and turns it into a circus. Together with his young Protegé Phillip (Zac Efron), he puts on a show that fills the house day after day, but also provokes protests on the streets. However, Barnum's full coffers are no longer sufficient at some point. He also wants social recognition, which he has been denied so far. But when he discovers the Swedish opera singer Jenny Lind (Rebecca Ferguson) and she advances to superstar status as the "Swedish Nightingale", that could finally change - but at what price?

Although some aspects of "Greatest Showman" correspond to reality and there are real models for many characters, the musical is by no means a biopic, but rather a colourful fairy tale about following one's dreams. The film is also a plea for tolerance and self-confidence. This is not conveyed in a very subtle way, for which the romance between the fictitious characters Phillip and the colorful artist Anne (Zendaya) is a very good example. Moreover, the message of the film probably doesn't correspond to the business sense of the real P.T. Barnum. But no matter: Even though the whole thing is as rich as cotton candy and has very little to do with reality, the movie is still absolutely worth seeing.

And there are several reasons for this. The main reason is Hugh Jackman, who with his charisma makes even the most kitschy moments of the movie moving and charming. Considering that he only convinced in the dirtiest and most brutal version of his Wolverine character a few months ago, you notice what a good and versatile actor the Australians are. Besides Jackman, it's also the catchy and stirringly choreographed music numbers that make "Greatest Showman" a great movie experience. And the story is simply beautiful in this fictitious version.

Therefore: brain off, heart on! Then this journey to the beginnings of show business is a feast for the eyes and ears. Those who like movies like "Moulin Rouge" (without its eccentric vein) or "Chicago" will love "Greatest Showman". Absolutely worth seeing!

Picture + sound: The technical implementation of Blu-Ray is at a very high level. The sharpness of the pictures is great and allows even small details and textures to come to the fore, which is of course very good for the detail-loving equipment and the colorful costumes. The colour scheme is very warm and powerful and the matching of black levels and contrasts also support the positive overall impression of the image quality. The same can be said for the sound. The music sounds just as powerful from the speakers as the dialogues, ambient noises or some well placed sound effects.  Very good!

Extras: In addition to an informative audio commentary by the director (with optional subtitles) and a film version for singing along (with faded-in lyrics), the Blu-ray also offers around two hours of extras, some of which are worth seeing. We start with a short documentary about the idea and the background of the film (ca. 14:05 min.). By far the longest extra follows: The multi-part documentary "The Songs" (approx. 70:08 min.) analyses each song of the film and shows pictures from the recording sessions. If you love the film because of the music, you can't get past this documentary.

The spectacle continues with "Das Spektakel" (approx. 32:12 min.), a multi-part making of in which the figures, the choreographies, the music or the image design are examined under the magnifying glass. Picture galleries round off the good additional offer.

Fazit: After a restrained start, "Greatest Showman" developed into a real long runner at the box offices. The darling of the audience shines on Blu-ray in very good picture and sound quality and also has a lot of worth seeing extras on board. No question about it, this film musical will also continue its success story in home cinema. absolutely recommended