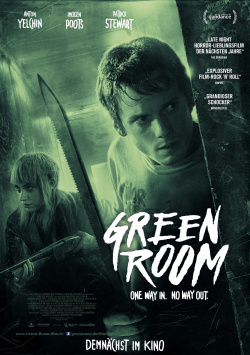 With little fuel in the tank and even less money in the pockets, the young punk band "Ain`t Rights" barely makes it to a gig in a pub somewhere in the American no man's land. It's not a big performance in front of a not exactly pleasant audience, but when it comes to a possible fee, the band can't be choosy. And so they make a proper appearance in front of a horde of Nazis. After that they just want to grab their pay and their stuff and then go. But stupidly, they become involuntary witnesses of a murder. And now they are not allowed to leave the Green Room of the pub - supposedly to make a statement to the already called cops. But instead Darcy Banker (Patrick Stewart), the leader of the Nazi gang, appears. And he sees in the young musicians a danger that must be eliminated at all costs. Together with the skin girl Amber (Imogen Poots) the punk musicians barricade themselves in the small backstage room and a merciless fight for survival begins…

"Green Room" is a nasty, dirty little thriller, which serves up its rather simple story with many successful shock moments and a good portion of dark humour. The siege scenario is strongly reminiscent of the John Carpenter classic "Assault - Anschlag bei Nacht" (Assault - attack at night), but gets its very own twist here. Director Jeremy Saulnier creates a very special atmosphere of threat, which is intensified by the remote location of the pub as well as by the behaviour of the Nazi gang. The codex they follow is explained only marginally, as are the background to the murder and the apparently illegal business in which the gang is involved. Thus many questions arise, which are answered only conditionally. This could now be interpreted as a weakness of the film. But since the audience should feel as helpless and helpless as the young musicians, the feeling of hopelessness and the unpredictability of the opponent is intensified.

The actors are all well cast, but Patrick Stewart really stands out as an ice-cold old Nazi. He is so wonderfully evil here that you completely forget all his sympathetic roles from Captain Picard to Professor Charles Xavier. Stewart strikes just the right note that makes his figure fearsome and does not make it into an exaggerated caricature. Thus, Saulnier can also use humor interspersed with bitter cynicism again and again, without his film taking on comedic traits and the tension diminishing for even one second. Until the well done end you are tied up as a viewer and are still entertained really well.

"Green Room" is evil, sometimes very bloody and also a little surprising. A very well done genre movie, which convinces with a mixture of old-school motives, thrilling thriller elements and rough slasher interludes. Nothing for the delicately tactful, but for fans who don't want to let paranormal activities or ghost houses give them goosebumps, it's quite clear: Absolutely worth seeing!