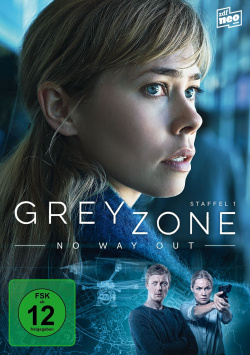 Content: When Victoria (Brigitte Hjort Sørenson), successful engineer of a leading drone manufacturer, meets her former fellow student Iyad (Ardalan Esmaili) at a conference in Frankfurt, she has no idea what will happen when he asks her for an interview. But when he visits her in her apartment, a real horror trip begins for Victoria, because Iyad takes her and her son Oscar hostage. Iyad is part of a terrorist cell planning an attack in Scandinavia. And to carry it out they need Victoria, who now has to fight not only for her life, but also with her conscience.

At the same time a Danish-Swedish anti-terrorist unit is desperately searching for a missing missile explosive. The Swedish policewoman Eva (Tova Magnusson) and the Danish PET officer Jesper (Joachim Fjelstrup) are on a desperate hunt for the backers to prevent a possible attack. Her trail also leads to Victoria…

Etwa in the third episode of "Greyzone" one wonders what can happen now - after all, the story is told over ten episodes. And somehow you can already guess the end. But even if the whole thing is somewhat predictable, the makers succeed in expanding the story with its individual plot strands in such a way that there are always surprises and above all breathless tension. In a few moments, one really clings to the armchair in the hope that Victoria and her son may succeed in escaping - knowing full well that their martyrdom will continue a few more consequences.

This especially concerns a moment when the series would actually have ended. But the makers have found a truly perfidious reason to forbid the engineer from safety. As a viewer, you really wouldn't have expected that. Surely, the series is not free of clichés and some subplots seem more like filling material. But all in all there is a really gripping thriller series, which can convince with an outstanding Brigitte Hjort Sørenson ("Borgen") even in the somewhat constructed moments. A series for which the term "Binge Watching" seems to have been invented! Absolutely worth seeing!

Picture + sound: The overall picture and sound quality of the DVD is on a good to very good TV level. The image is clean and, apart from slight noise in darker sequences, there are no noticeable disturbances visible. The colour scheme is harmonious and underlines the slightly hypothermia-threatening atmosphere of the story. The sound is primarily determined by the rather centrally mixed dialogues, but also has some good surround moments to offer. Good.

Extras: As bonus material on the third DVD there are some detailed promo interviews with the actors and the makers. What is really interesting is the interview with a hostage-taking and counter-terrorism specialist who worked on the series as a consultant. A total of around 48 minutes bonus of the conventional, somewhat dry kind.

Fazit: "Greyzone" is an exciting thriller series, which despite some clichés and a quite predictable ending can be captivating throughout. There are some scenes in which the tension is perfectly pushed to the extreme, so that even the more quiet moments never seem boring. Great played and atmospherically staged. The DVD presents all 10 episodes on three DVDs and also offers around 48 minutes of interviews as an extra. That's what it's all about: absolutely recommended!