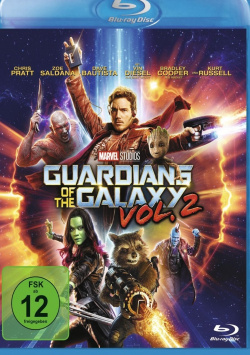 Guardians of the Galaxy Vol 2 - Blu-ray

Film: When in 2014 the "Guardians of the Galaxy", a rather unknown troupe from the MARVEL universe, was sent into the cinemas, it was in a way a big risk. Although the MARVEL films have always been a safe bank, it was by no means guaranteed that even these rather weird space heroes would be able to lure the masses into the cinemas. Nevertheless, the director James Gunn ("Slither"), who until then had only been known to a small genre audience, was entrusted with a mega-budget of 170 million dollars. The courage paid off, because "Guardians of the Galaxy" became a mega hit and its protagonists became absolute audience favourites.

And so Peter Quill (Chris Pratt), also called "Star Lord", raccoon Rocket Racoon (in the German version spoken by Fahri Yardim), Baummenschen Groot in simply wonderful Baby Groot variant, the mysterious Gamora (Zoe Saldana) and the bear-strong Drax the Destroyer (Dave Bautista) may now save the universe a second time. The fact that the concept of justice is sometimes interpreted very freely by them brings them a lot of trouble with a new order, so that they suddenly see themselves persecuted by the huge fleet of an entire people. But they are rescued from the predicament by a mysterious stranger. His name is Ego (Kurt Russell), who claims to be Peter's father. While Rocket and Baby Groot take care to get their battered ship afloat again and at the same time take care of the Nebula (Karen Gillan) they are holding, Peter, Gamora and Drax follow Ego to his planet - not suspecting what dangers the Guardians will still be waiting for from all sides…

One thing right away: "Guardians of the Galaxy Vol. 2" is good! Even very good, measured by its entertainment value. There are a lot of funny moments, proper action and great effects. And Baby Groot is just kneel! However, now comes a big BUT: The sequel simply lacks the surprise effect of the first movie. At that time, the audience just didn't know what to expect. The trailers were simply not meaningful enough for that. With Vol. 2 there is now already a certain expectation, which is enormously high with many fans. And James Gunn has given everything to fulfil these expectations. As a result, the movie lacks the light-hearted ease of the first one at some points and tries too hard to even surpass its wit, originality and action. And unfortunately this only works very rarely.

Whoever approaches this sequel with too high expectations could be disappointed. But if you just want to have more fun with the crazy crew, you will get your money's worth. The story may be a bit thin, but it provides a lot of answers to questions that remained unanswered at the end of part 1. Apart from that, James Gunn remains true to the proven formula in Part 2: There are pithy sayings, an extremely cool soundtrack and fast-paced space battles - all spiced up with a good portion of humour. What's very positive is that the makers managed to keep some surprises a secret until the very end. Thus, there are actually some good aha-moments, which, in connection with the other positive aspects of the movie, loosely comfort the viewer about the forgivable weaknesses.

All in all "Guardians of the Galaxy Vol. 2" is a perfect popcorn cinema. Colourful, amusing, action-packed and cool - just like a comic strip film should be. And it's a movie in which it's really worth watching until the end, because during the credits there aren't one and not two credit scenes, as you've come to expect from MARVEL movies, but five! Altogether all this is enough for a galactic good: Absolutely worth seeing!

>Picture + sound: Alarmingly weak colors, distinct blurriness, artifacts, or blurred contrasts - you won't find any of that here. Whew! But it wasn't to be expected from a technically perfect blockbuster, was it? And so it is no real surprise that the Blu-ray presentation of Vol. 2 was excellent to say the least. A razor-sharp picture, a pleasant image depth and rich colours make the film a real pleasure even in home cinema. And also the very well mixed sound can score not only in the action-heavy scenes with a lot of surround feeling and powerful effects. Very good.

Extras: The additional offer is good, but not overwhelming. It starts with an entertaining and informative audio commentary by James Gunn, in which it becomes clear once again how much passion the director has for staging his films. We continue with a four-part Making of (approx. 37:39 min.), which is quite decent, but unfortunately also very conventional. A funny music video for the song "Guardians Inferno" (approx. 3:35 min.), a gag reel (approx. 3:41 min.), as well as four cut or extended scenes with unfinished effects (approx. 5:04 min.) are also on the menu.

Fazit: "Guardians of the Galaxy Vol. 2" is colorful, amusing, action-packed and cool - just like a comic movie should be. The surprise effect of Vol. 1 is missing and some scenes are too lengthy. But all in all, the sequel offers perfect popcorn entertainment, which is brought to the home cinema on Blu-ray in great picture and sound quality. The bonus material is nice, but could have been a bit more extensive and a bit less conventional. But all in all there is a clear one again: Absolutely recommendable!