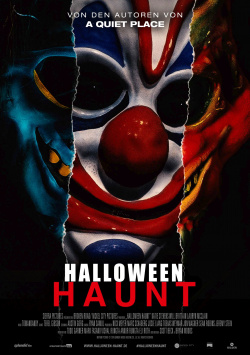 It's Halloween and as every year in 2019 there are a lot of young people looking for the perfect horror kick. So was the clique around the student Harper (Katie Stevens). They want to be taught fear in a remote haunted house, which promises terror and terror to the visitors. In return, they are even persuaded to hand in their mobile phones at the entrance. A decision they soon regret bitterly. After a rather slow start, the horror attractions quickly turn into bloody horror traps, from which there seems to be no escape. The friends realize that they have fallen into the trap of a horde of killers and they have no choice but to fight their way through the individual rooms, hoping to find an exit somewhere…

"Halloween Haunt" is the latest directorial work by genre specialists Scott Beck and Bryan Woods, who surprised the audience last year with their script for the surprise hit "A Quiet Place". But her new halloween shocker isn't really surprising. The characters are changing clichés, to which the viewer actually has little sympathy. The behavior of the characters is so stupid at times, that the viewer can only grab his head. Sure, somehow it's part of the genre, but here it's already very negative.

The haunted house with its bloody surprises provides some moments of suspense for lovers of the more violent Gores. And the atmosphere that the directing duo builds up in this setting can certainly make up for some of the many dramaturgical weaknesses. But this doesn't make the movie really good. The whole thing remains even in the best moments very exchangeable B-Movie merchandise, which entertains quite well, but is forgotten sooner than you can say "Halloween".

Horror fans, for whom a harmonious atmosphere and some proper splatter inserts will be sufficient, this visit to the Terror House can certainly have their joy. For everyone else it should be enough to have a look at the movie if it is available for home cinema. Worth seeing only with some exceptions!