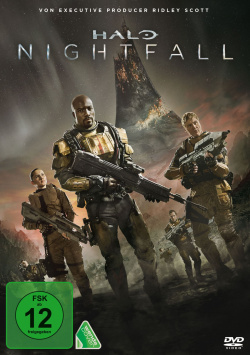 Content: In a distant future in which humans have long since settled other planets, there is a bitter war between humans and an alien alliance called The Covenant. This war was officially ended with a peace treaty. But especially on the outer earth colonies violent attacks of the covenant occur again and again. Such an attack is apparently also imminent on the planet Sedra (92% human population). Agent Locke (Mike Colter) of the UNSC is supposed to thwart the attack, but cannot prevent the elite Zealot from detonating the explosive device. The element released in this way damages the human THEN and many inhabitants of Sedra become ill. In order to prevent an impending mass death, Lock and Colonel Aiken (Steven Waddington) must fly from the Sedran Army to the remote location in the Halo Ring where this element is extracted. Their mission is not under a good star because they only have a few hours to destroy Alpha Shard. This is almost impossible in view of the emergence of deadly hunting worms...

After the great success of the Internet series "Halo 4: Forward unto Dawn", which was later also released in feature film form, director Sergio Mimica-Gezzan was allowed to stage another series as an introduction to the next "Halo" game, which was initially released exclusively on the Halo channel of the X-Box. The series introduces the character of the agent Locke, who will play an important role in "Halo 5". The opening sequence, in which he appears for the first time, promises an exciting SciFi adventure. When Locke and his team follow the Zelot into a busy shopping mall and there is a dramatic showdown, it can be both visually and speed-wise absolutely convincing. And even the first minutes on Alpha Shard offer really good genre food, especially from an optical point of view.

There are some parallels to other movies like "Pitch Black", which hardly diminishes the pleasure of the story. The emergence of the hunting worms (Lekgolo) is then also a great highlight of the suspense, but it also makes clear that certain prior knowledge is already necessary in order not to be distracted by questions about a certain logic. If you dive into the "Halo" universe for the first time, you will not only wonder where these worms come from, but also how they can survive on Alpha Shard with its extreme temperatures. Those who are familiar with this world, on the other hand, will not have to ask themselves this question in the first place. However, such moments are rather rare, so that you can confidently enjoy this movie even if you approach this exciting mission completely unprepared.

In the last half hour the action increases, but the whole thing isn't as thrilling and convincing as it was at the beginning. The course of the mission becomes too predictable here and the genre clichés, which are not exactly sparsely used anyway, now take complete control. This doesn't make the movie a bad one for a long time, but it does cloud the otherwise very neat overall impression a little bit. If you don't expect a masterpiece, know a bit about the "Halo" universe and just want to see 90 minutes of good SciFi entertainment, this prequel to the next video game can be recommended!

Picture + sound: The DVD picture is very clean, no picture interference or dirt can be seen. The color scheme sometimes seems a bit undercooled, which, however, fits well into the futuristic atmosphere of the movie. The picture sharpness is on a good level and also the contrasts underline the good overall impression. The sound is in a powerful Dolby Digital 5.1 mix, which has some decent surround effects just in the last third. Good!

Conclusion: The film "Halo: Nightfall", originally conceived as a web series, proves to be absolutely solid science fiction entertainment with some good action sequences that not only fans of the successful video game series can enjoy. However, you should already be familiar with the "Halo" universe in order to be able to keep track of things at any moment. Even if the tension curve drops a little in the last third, the whole thing is not only worth seeing as a transition to the next "Halo" game. On the DVD the film presents itself in appealing picture and sound quality. Worth seeing bonus material about the creation of "Halo: Nightfall" can also be seen. But there is a very clear one: Recommended!