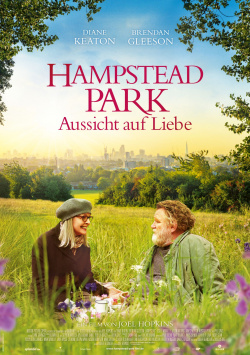 Once she had such a beautiful life, but now it's in ruins. Her wonderful London apartment directly opposite the picturesque Hampstead Park is in ever-increasing need of renovation, but the American Emily (Diane Keaton) can't pay for the damage because she only got a mountain of debt from her late husband - and many painful memories of his infidelity. More and more she retreats into her little nest and is particularly afraid of contact with her neighbour Fiona (Lesley Manville) and her friends. But when one day she helps a stranger (Brendan Gleeson) who is attacked by a group of thugs in the park, her life suddenly changes. Emily is fascinated by the odd Donald, who has been living in a small hidden hut in the park for many years. But now his idyllic home is in danger of coming to an end, as it is to give way to a luxury construction project for which Fiona is also a champion. Finally Emily has a new goal in life - she wants to help Donald to stay in Hampstead Park - and in her vicinity -…

After Diane Keaton seemed to have always played the role of the hysterical super-(grandmother) in the last years, "Hampstead Park" fortunately shows a much more reserved presentation of the Oscar winner. And that's a good thing, because in her last movies you always had the feeling that Keaton was selling significantly below value and playing the same role over and over again. Admittedly, Emily is not completely different from the other women she played last. But it lacks this shrill hysteria, which has pulled so much at the nerves of the audience with works like "The Big Wedding", "From woman to woman" or "All years again - Christmas with the Coopers".

On the side of a wonderfully grumpy Brendan Gleeson and spiced with a good portion of British humor, Diane Keaton can convince in a charming romance that has some really beautiful moments and in the truest sense of the word dreamlike pictures to offer. The simple, but somehow very idyllic empire that Donald has built up certainly leads to some (admittedly idealized) dreams of dropout. Director Joel Hopkins ("Wie in alten Zeiten") relies on an overall rather discreet production, which largely does without slapstick or a lot of tempo. This gives the very nice story an additional sympathetic note.

Nevertheless, it has to be said that the film always follows safe paths. There are no surprises and all conflicts are resolved very easily in the end. This may not change the fact that "Hampstead Park" offers its target group good entertainment. However, more than shallow sprinkling is not offered. If you don't expect more and just want to see a nice story with a good feel-good factor, here's a clear one for you: Worth seeing!