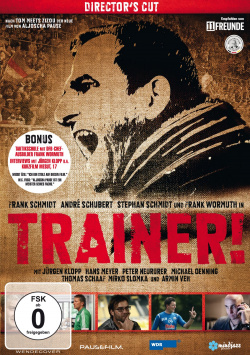 Film: If a soccer team wins, then first the players, then of course also the coach are celebrated by fans and press. But the tide can already turn completely after a defeat. Then the coach is usually the first to be in the crosshairs, confronted with insults from the fan block and not always objective reporting in the press. Especially with the latter it seems to be more about mood swindling than about honest sports reporting. And the pressure from the club boards is also growing steadily, which can turn the profession of coach into a real test for the body and mind. Filmmaker Aljoscha Pause, who had already staged a really worth seeing soccer documentary with "Tom meets Zizou - Kein Sommermärchen" (Tom meets Zizou - no summer fairy tale), now takes on the profession of soccer coach in his latest film.

At the centre of "Trainer!" are Frank Schmidt from FC Heidenheim, FC St. Pauli and Stephan Schmidt from SC Paderborn. But also other coaches like Jürgen Klopp, Armin Veh or Hans Meyer speak in very honest conversations. In interviews and snapshots of the season preparation, test matches, training, team meetings, victories and rough defeats, Pause paints a very comprehensive, honest and exciting picture of the profession of the professional football coach. It is not only in extreme situations, such as when André Schubert is fired after seven unsuccessful match days at FC St. Pauli, that it becomes clear under what pressure the coaches are not only under during the actual matches.

Press, players, board, fans - they all exert enormous pressure, which not every coach can cope with equally. The fact that this is discussed very openly and that the interviewees not only go to court with themselves, but also with various press representatives or the board, gives the documentary a certain credibility and depth, which ultimately makes it so thrilling and worth seeing.

Pause finds a good balance between amusing moments, great playful snapshots and a high information content. However, this is never dry or too factual and is even for viewers who aren't otherwise enthusiastic about everything around the round leather, extremely interesting and worth seeing. Aljoscha Pause shows not only a great love for football, but also a great respect for the performance of all involved, which is why the film always seems balanced and never one-sidedly positioned. And despite its impressive running time of almost two and a half hours, there is hardly any boredom.

So "Trainer!" is an excellent football documentary that not only shows what a coach earns his living with, but also reveals what it's a little sick of in the circus around football today. At the same time, however, the film also manages to capture the fascination that sport continues to exert on its fans and which so inspires millions of people in the stadiums, in front of the television sets or on the small and large football pitches in Germany. Therefore there is for this DVD from a confessing non-soccer fan a clear one: absolutely worth seeing!

image + sound: Image and sound quality of the DVD are on a good to very good level for a documentation. The picture is absolutely clean and has a very high picture sharpness, especially in the interview sequences. But even with faster camera pans, for example during training, there are hardly any weaknesses worth mentioning. The fact that the sound determined by the interviews is only available in a stereo mix is not disturbing, as there are only very few real surround moments in documentaries anyway. The sound sounds very powerful and leaves a good overall impression.

Extras: As a bonus there is a tactics school with DFB chief instructor Frank Wormuth (approx. 18:45 min.) on the DVD, in which information about topics such as basic formation, conversion from a chain of four to a chain of three, the different types of pressing or about what Tiki Taka is offered. In addition, there are extended interviews (approx. 15 minutes) on topics such as tactics, training, the relationship of players to coaches or coaching in general. Aljoscha Pauses short film "Mesut, 17" (approx. 10 min.) from 2006 and the trailer for the film round off the good additional offer.

Fazit: "Trainer!" is a great sports documentary, which not only functions as a very open and unembellished portrait of three coaches, but also as a cinematic approach to this profession and all the difficulties it entails. Although this is particularly interesting for football fans, it can also cast a spell over spectators who don't have much to do with the round leather itself. A documentation that is really good in terms of craftsmanship and captivatingly staged, which also has some very interesting extras to offer on the technically convincing DVD. A winner for which a clear "recommendable" can be pronounced.