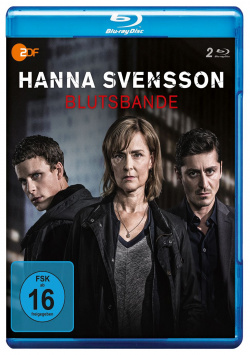 Film: Hanna Svensson (Marie Richardson) is a policewoman with body and soul. Her high sense of morality at work even leads her to the point that she imprisons her own son Christian (Adam Pålsson) for drug trafficking. Two years later Hanna, who has been degraded to the department for white-collar crime, is about to end her career and has to come to terms with the fact that Christian, who has just been released from prison, does not want to have any contact with her. But when Hanna's secret lover Sven (Johan Hedenberg) disappears without a trace, the policewoman wipes away all private worries. Together with Sven's colleague Björn (Magnus Krepper) she goes on a search for her lover and comes across his investigation against the Croatian mafia family Mimica, which also seems to be involved in a gang war between the rival rock gangs Mobsters and Delicuentos. The mysterious informant "Inez" provides the investigators with valuable clues. But Hanna does not suspect that Inez is Christian, who has won the trust of the Mimica family and who puts himself in danger with every hint he passes on about their machinations…

"Hanna Svensson - Blutsbande" is a special crime series for various reasons. On the one hand, there is the main character: an investigator who is at the end of her career, who is not a smooth heroine, but a woman who has shot herself out of the picture both professionally and as a family due to her moral standards. Then there is the family history - nothing unusual for a crime series. But here she gets a special twist, which can tighten the tension screw on different levels. And then there's the story of several storylines, which is told at a rather leisurely pace, but which can nevertheless captivate from the first to the last second.

This is achieved by the fact that the makers build up a basic atmosphere that credibly conveys that the protagonists - no matter on which side they stand - are in constant danger. In danger of getting caught, losing something or even getting killed. Moreover, the gangsters are also drawn in a pleasantly multi-layered way, which leads to the fact that not only the investigators are very interesting figures. No matter which storyline is shown from which perspective, as a spectator you are always feverish with it.

Addicted, there are some moments in which the actions of individual characters seem somewhat constructed. It may well happen that the story loses some of its credibility and traction. But in the end the few weak moments only have a marginal effect on the overall impression. "Hanna Svensson - Blutsbande" offers really good thriller entertainment with lots of interesting characters and some really good moments of suspense, which even though it's only a few small lengths, keep you tied up for almost ten hours. That's what it's all about: Absolutely worth seeing!

Picture + Sound: There's nothing wrong with mixing picture and sound. The visual realization pleases with an atmospheric coloring and a good overall sharpness for a TV production. There are also no noteworthy weaknesses in the detail display and the mixing of contrasts. The DTS-HD Master Audio 5.1 is largely determined by the dialogues and therefore remains unspectacular. In some moments, however, smaller sound effects or even the music make it clear that the surround channels are also used to weave an atmospheric crime thriller sound carpet. Good!

Extras: Unfortunately the Blu-ray has no bonus material to offer.

Fazit: "Hanna Svensson - Blutsbande" is an exciting crime series, which not only has an interesting and pleasantly multilayered main character. The ten-part series also takes time to develop the individual characters and their stories and to bring them together into a gripping whole. It doesn't always have speed, but it never gets really boring. Even if the double Blu-ray doesn't have any extras to offer besides the ten episodes, the following applies to the set: Absolutely recommendable!