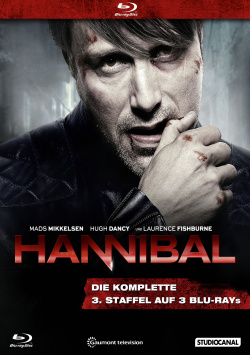 Film: After the bloody events at the end of the second season, Dr. Hannibal Lecter (Mads Mikkelsen) together with his therapist Dr. Bedelia Du Maurier (Gillian Anderson) was sent to Italy, where he acquired a new identity in his very own way. But Will Graham (Hugh Dancy) and Jack Crawford (Laurence Fishburne) are not deterred by the distance and do everything they can to find out where Lecktor is. They're not the only ones: Mason Verger (Joe Anderson) also has a bill open with Lecter and he's willing to pay a lot of money to settle it…

After only three seasons "Hannibal" unfortunately says goodbye to his fans again. But even if it would have been exciting to see how this great series approaches the adaptation of "The Silence of the Lambs", it has to be said at the end of this season that the farewell couldn't have been better. The last episodes are extremely strong and form a round finale to a series that has always explored its limits. Even the season opener is visually one of the most unusual events ever to be seen on American network TV. The sequence plays on three different levels of time and narrative, which differ not only dramaturgically but also visually (colouring, picture format). More should not be betrayed at this point, of course. Just this much: this first episode makes it clear that season 3 will differ in many ways from its two predecessors and thus not only represents a continuation of the story, but also a creative further development.

If elements from the novel "Hannibal", already filmed by Ridley Scott as a sequel to "The Silence of the Lambs", are used in the first six episodes, the second half of the season belongs entirely to the "Red Dragon". This novel has already been filmed twice for the cinema. Therefore, it was very important for the series makers around Bryan Fuller to gain new facets from the well-known fabric. And they did that very well. Of course, some important aspects from the novel, which you also know from the two other film adaptations, shouldn't be missing. But all in all something very special has been created out of known stuff, which will also captivate the fans who have read the book and seen both adaptations.

The actors again contribute a considerable part to the fact that the series works so well. Mads Mikkelsen is simply great in the role that made Anthony Hopkins so unforgettable. Hugh Dancy is no less convincing as an investigator on the verge of insanity. And Richard Armitage ("The Hobbit") also lends his character the insane killer a psychological depth that is simply disturbingly good. All the good actors, the sometimes really artistic visual language, the mixture of delusions, dreams and reality, the perfectly applied music - all this makes "Hannibal" a really outstanding series. However, even the last season is again nothing for weak nerves. Because apart from the dark-destroying atmosphere and the at times very high tension level there are some very drastic moments in some episodes, which could really hit the stomach of tender-strung viewers.

With some outstanding episodes and an almost perfect finale the series bids farewell to its fans on a very high level. Whether it will be a farewell forever, Bryan Fuller leaves that open. If another broadcaster - or a streaming service like Netflix - were ever interested in continuing the story as planned, Fuller and his cast would definitely be back. But even if it doesn't come to that, with these three outstanding seasons they have left their fans with first-class TV food and a more than worthy adaptation of Thomas Harris's novels. And there's one for that, too: Absolutely worth seeing!!

Picture + sound: The colouring is extremely atmospheric, whereby the very different colour tones of different scenes capture the oppressive mood of the story very well. The picture sharpness is on a good to very high level for a current TV series. Even in gloomy scenes smaller details come into their own. The 5.1 DTS-HD MA Mix is also pleasantly atmospheric, with the voices sounding very directionally mixed. However, ambient noises and sound effects also make sure that the surround channels also get something to do and give you goose bumps. Good!

Extras: In addition to interesting audio comments on most episodes, the third Blu-ray also has lots of video extras to offer. We start with a very detailed documentary about the way the novel "Red Dragon" was adapted in the second half of this season. In a little more than two hours (!) the production will be discussed as well as the differences to the two films of the novel. A really good documentary that fans of the series and the novels shouldn't miss.

Fazit: With the third season "Hannibal" already says goodbye to his fans. But even though it's sad that these are already the last episodes of this outstanding and multi-layered thriller series, it still ends on a very high level. The Blu-ray presents the visually impressive episodes in very good picture and sound quality and also has lots of great extras on board. Of course there is no doubt: Absolutely recommendable!