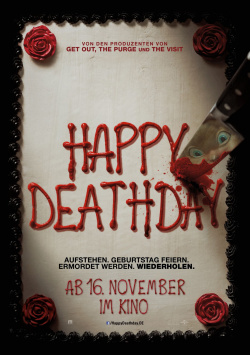 And every day the Sensemann greets: For the young student Tree (Jessica Rothe) her own birthday becomes a real nightmare. Not only does she wake up completely hungover next to a one-night stand (Israel Broussard), but her roommate, her professor, with whom she has an affair, and her father, with whom she has a very tense relationship since the death of her mother, don't sweeten this day. And to make matters worse, in the evening a masked stranger appears and kills them - just so that Tree has to wake up this morning and experience the day again and again. Whatever she tries, it always ends in her death. For Tree, it's clear that to escape this vicious circle, she must find out who might be after her life. But the list of potential killers is frighteningly long…

"Happy Deathday" is not really a horror movie, even if the title and parts of the trailer suggest it. Rather, it's a humorous teeny version of "Und täglich grüßt das Murmeltier" with slasher bonds, which are so harmless that the FSK has even released the entertaining time loop from 12. The target group between 12 and 17 years of age is also well served with some nice jokes, a solid dose of tension and a good soundtrack. The fact that director Christopher Landon doesn't take logic quite so seriously - which can be called the understatement of the year - shouldn't be taken any further negatively. Because apart from the fact that the time loop theme lacks any logic, "Happy Deathday" is never about whether a new turn of action makes sense, but whether it can maintain the entertainment value of the movie. And since this is quite successful, the many logic holes can be safely ignored.

Given, it's hard not to frown over the innumerable clichés or to be disturbed by the extremely one-dimensionally drawn characters. Also, the fact that Tree isn't really a very likeable person, whom you might not necessarily wish for a movie death, but also not necessarily a happy ending, clouds the fun a bit. But here, too, the following applies: Since the film never pretends to be more than it is, and offers entertaining entertainment for a young target group with its simple means, the quite justified criticisms don't weigh particularly heavily in the end.

Whoever has seen the trailer knows exactly what he is getting into. And then gets exactly that. No surprises, positive or negative. Is that demanding? I don't think so. Does the film leave a lasting impression? Absolutely not! Does it offer fun popcorn entertainment with a few good laughs and a little thrill? Oh, yeah! And anyone who is prepared to pay for a cinema ticket can also be recommended this murderous birthday with a clear conscience. Worth seeing