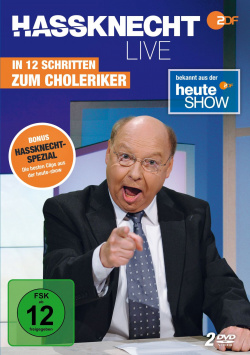 Film: There are so many things in our country you can get really excited about. The energy revolution is not coming because it is too expensive, but the cold war is back. The solidarity surcharge will not be abolished, but there will be a waste of tax money wherever you look. And we don't even want to start with the afternoon program of the private stations. One who has perfected the excitement of such themes is Gernot Hassknecht. With his regular appearances in the successful "heute-show", Hassknecht has long since become a cult figure. Now it's time to give something back to the audience. And that's why Gernot Hassknecht is treading through the country with his program "Hassknecht Live" to teach his audience how they can become the perfect choleric person in just 12 steps.

Although it's not enough just to get excited about certain topics. It also requires the right breathing technique to stimulate the anger chakra so that it can break out properly. The right diet is also important for hobby and professional cholerists. After all, the excitement is also a kind of sport. It requires endurance and good physical condition. After all, there is always and everywhere an opportunity to prove yourself to be a perfect choleric.

No question, Gernot Hassknecht is one of the most popular characters of the "heute-show". Actor Hans-Joachim Heist embodies the rabid citizen par excellence really well. However, one notices again and again that Gernot Hassknecht is a pure artificial figure. Anyone who has ever seen his role model from the American "Daily Show", the comedian, actor and author Lewis Black, will not only recognize the clear parallels between the two, but will also see that Black's outbursts of rage seem far less played than those of Gernot Hassknecht.

That doesn't change much about the fact that the character Gernot Hassknecht has scolded a large fan community, which also likes to experience his outbursts of rage live. No wonder, then, that he keeps appearing in front of sold-out houses. The DVD now offers everyone who hasn't (yet) got tickets or simply wants to see the program again and again the opportunity to take part in the 12-step course to become the perfect choleric person. That is, if you generally agree with the political orientation of the "heute-show", very funny and sometimes in a wonderfully biting way to the point. Admittedly, some topics are somewhat worn out (Berlin airport, RTL afternoon program). But other numbers such as the history of the letter of complaint or a look at today's form of protest among German citizens make up for small pitfalls. Those who already like Gernot Hassknecht in small doses in the "heute-show" should not miss the full pack of outbursts of rage. Worth seeing!

Picture + sound: Picture and sound are at a good level for a live recording. The picture offers a good overall sharpness and a harmonious color mixture, sometimes only appears a little sterile (which may be due to the very simple stage design). The sound makes the amusing ones sound well understandable from the speakers. Possible difficulties could only occur if you have set the TV too loud at the beginning and then it really crashes when Mr. Hassknecht bursts his collar again.

Extras: On the first DVD there is an additional scene (about 8:28 min.) from the program. The second DVD contains the 33 best clips from the "heute-show" (approx. 86 min.). Those who like Hassknecht will certainly be delighted about this compilation. The clips are only very lovelessly cut out of the respective episodes. Choleric people could get upset quickly about this.

Fazit: "Hassknecht Live" is a must for all fans of the "heute-show". Hans-Joachim Heist alias Gernot Hassknecht leads his audience loudly on the way to the perfect choleric. Although there are some small lengths, the program works very well overall and is guaranteed to make fans of this character laugh heartily. In addition to the live programme, the double DVD also offers over 30 clips from the "heute-show" - the perfect all-round Hassknecht programme. Recommended