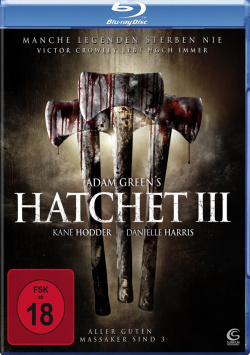 Content: After Marybeth (Danielle Harris) is convinced after the bloody experiences from "Hatchet II" that she has eliminated Victor Crowley (Kane Hodder) once and for all, she visits the police completely traumatized. But Sheriff Fowler (Zach Galligan, "Gremlins 1 + 2") and his men don't believe her that the mythical figure Crowley is the murderer of all the dead people in the swamps. For Fowler, what Marybeth has told him is "probably the stupidest story anyone can come up with," he has never heard anything so constructed. Therefore Marybeth is arrested and a team is sent to the alleged crime scene. What the cops find in the swamps off New Orleans is an unspeakable horror. And it's not over yet. According to legend, Victor Crowley is a revenant who rises again and again to relive the night of his death. Whether you saw him into pieces, shoot him or stake him, Victor Crowley returns in his old form. And there is only one person who can end this forever: the last descendant of one of the men responsible for Crowley's death. And that's Marybeth...

As in part 2, "Hatchet III" seamlessly follows the events of its predecessor. This results in a nice complete picture, which is led to an adequate end with this supposedly final episode. This second return of the deformed killer Victor Crowley remains true to the style of the series: there is some humor, very bloody murders and a nice running gag around the actor Parry Shen, who appears in every part in a different role, which is commented here in a very amusing way.

A little treat for horror fans is the meeting of two generations of Jason Vorhees actors from the "Friday the 13th" series. The duel between Kane Hodder (Jason in parts 7 - 10) and Derek Mears (Jason in the remake of 2009) is a bit short, but for Jason fans it is a real treat. And smaller guest appearances by genre darling Sid Haig and "Hatchet" creator Adam Green also make sure that the fun factor of this bloody finale is clearly raised.

That Green left the director's chair for the third part to debutante BJ McDonnell, who worked as a cameraman in the first two parts, doesn't really damage the quality of the film. It's true that the humor isn't as good as in the first movie, which was anyway more of an entertaining homage to 80's Slasher. Nevertheless, the mixture of classic, somewhat absurd horror and humorous interludes still works very well in the third infusion. Especially fans who also liked part 2 will enjoy this finale (?) very much.

This is only clouded by the fact that "Hatchet III", like its predecessor, did not make it to Germany in full. For many horror fans, cuts are simply unacceptable and so they resort to uncut variants from abroad. However, it should also be noted that those responsible have made a real effort to make the cuts as imperceptible as possible. This doesn't always work, but the smaller cuts don't really stand out. Anyone who doesn't already have their stomach turned by the term "cut" can confidently grab this version - because it's always fun. Only those who have the possibility to buy the film uncut should prefer the Uncut version!

Picture + Sound: The Blu-Ray offers the bloody drive in good picture and sound quality. The visual implementation pleases with a good sharpness of detail, which can also convince in the many dark scenes. Shades, black values and image depth also leave a good impression, as does the good colouring, which is particularly characterised by rich green and red tones. The sound convinces with well comprehensibly mixed dialogues and very powerful sound effects, which always provide a harmonious surround feeling. Good!

Extras: As a bonus there are two (unfortunately not subtitled) audio comments. The first one was recorded by director BJ McDonnell with producer and "Hatchet" inventor Adam Green, cameraman Will Barrett and MakeUp Effect director Robert Pedergraft. A good-humoured, interesting but also very technical commentary, which gives a good insight into the development of this second sequel. The second commentary gathers McDonnell and Green together with actor Kane Hodder in front of the microphone. Here there are some overlaps to the first comment and the conversation is also a bit less lively. The whole thing is entertaining for interested fans but still.

Besides the two comments there are also some video extras. A look behind the scenes (ca. 9:06 min.) is on the program as well as the featurettes "Raising Kane" (ca. 4:57 min.) and "Swamp Fun" (ca. 8:54 min.). The trailer and further program tips round off the additional offer.

Fazit: "Hatchet III" starts exactly where part 2 ended and brings the bloody story to a round conclusion. Even though the FSK 18 version released in Germany is missing a few scenes, the Blu-Ray still offers enough show value to offer fans of Victor Crowley good entertainment. Technically there is nothing wrong with the disc and also the clear bonus material can be seen and heard. If you liked parts 1 and 2 and can get over the mostly well done cuts, you can access this disc safely.