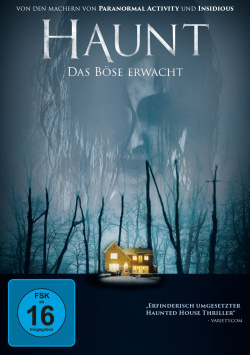 Contents: A terrible tragedy has occurred in the house where Evan (Harrison Gilbertson) moves with his parents Alan (Brian Wimmer) and Emily (Ione Skye), as well as his two sisters Sara (Danielle Chuchran) and Anita (Ella Harris). But apart from a disturbing portrait of the deceased son of the previous tenants, which Evan finds in his room, nothing actually reminds us of the tragic deaths that took place here. For the closed teenager, moving into the secluded house is more of a nuisance until he meets the neighbor girl Sam (Liana Liberato). Evan and Samantha quickly form a close bond and before he knows it, the boy has his first real girlfriend. But young happiness does not last long. Because when they find a box in a small room behind his room with which they can allegedly make contact with the dead, the two unknowingly open the gate to another world and bring an uncanny presence into the house, which wants to make sure that the new tenants here no longer come out alive...

"Haunt - Evil awakens", the feature film debut by director Mac Carter, doesn't really reinvent the wheel for the horror genre. Too obviously Carter makes use of several Haunted-House-thrillers, which have been flooding the market since the success of "The Amityville Horror". But even if the movie can't really set new impulses and the big surprises are limited, the classic creepy effects, which the staging makes use of again and again, work out really well again. Little girls who talk to the dead, creaking doors, eerie voices - all of this always gives you goose bumps.

The story that author Andrew Barrer has come up with strictly follows the rules of the genre, but makes no secret of it itself. Finally, Janet Morello, the only survivor of the family once living in the horror house, notices right at the beginning: "Every horror story begins with a house - and with a tragedy". In the case of "Haunt" this is the mysterious death of the three Morello children and the father, who in his grief tried to make contact with his children in the realm of the dead. The fact that the new family moving into the house also has three children is just as clear as the fact that one of the children is responsible for the fact that this new family in the house will not be happy.

Nevertheless, the script here and there tries to win a new page for all these familiar set pieces. So at least at the beginning the role Sam plays in the story isn't quite clear. The fact that it's only hinted at, that violence is done to her at home and that you only get to see her father in a shadowy way, if at all, might lead some genre connoisseurs to suspect, but the actual ending can't be foreseen until a pleasingly late stage. In general, the final is one of the reasons why "Haunt" works well. Similar to "Sinister", for example, the last twist once again provides a little shock moment, which goes along with a pleasant goose bump that lasts until after the credits.

Although Mac Carter didn't deliver a masterpiece here, his directing debut is a solid and atmospherically effective horror film, which can be warmly recommended to all lovers of classic ghosthouse films. Worth seeing!

Picture + sound: The technical realization of the film is very atmospheric. Even though there are some minor weaknesses in the detail representation and minimal picture noise to be discovered in the darker scenes, the color scheme and the harmonious contrast mix capture the dark and tense mood of the story very well. The targeted sound effects underline this impression. They provide pleasant dynamics on the surround channels in an otherwise rather reserved sound mix. All in all there is an absolutely deserved one for it: Gut!

Extras: Unfortunately, the DVD does not have any bonus material to offer.

Fazit: "Haunt - The Evil Awakes" is an exciting horror thriller, which comforts with some successful shock moments and a quite surprising finale about the otherwise missing originality. But even though the story might be just another clone of genre classics like the "Amityville Horror", director Mac Carter's feature film debut is extremely gripping and, apart from a few small hangers, also staged in a thrilling way. If you like classic creepy food and can't get enough of ghost house stories, you should definitely buy this technically well done DVD. Recommended