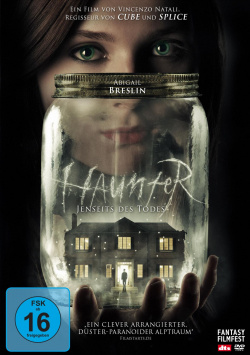 Content: The own family is extremely annoying for almost all teenage girls. But for Lisa (Abigail Breslin) life with her parents (Peter Outerbridge, Michelle Nolden) and her little brother Robbie (Peter DaCunha) is especially exhausting. Because Lisa is trapped in a time loop and experiences the same day again and again. Real variety cannot bring her into this grueling routine because she cannot leave the house. But that's not all, Lisa is also regularly haunted by ghostly apparitions. They all seem to have been victims of a brutal serial killer, whose spirit is also still present in the house. And apparently Lisa must find a way to give peace to the spirits of the deceased. Or maybe everything is completely different than she thinks?

"Haunter - Jenseits des Todes" is the latest mystery horror film by Vincenzo Natali, who has already made very successful and surprising genre contributions with "Cube" and "Splice". His latest film lacks a little bit of originality, as one feels reminded of a mixture of movies like "Und täglich grüßt das Murmeltier", "The sixth Sense" and "The Others". But even though this minimizes the big surprise effect of some plot twists, it doesn't change the overall high entertainment value of the movie. The beginning is still spiced with some rather humorous moments, which suggest a cheerful and dark "Marmot" variant to the viewer. But this impression changes quickly with the first very successful goose bump moment. Then "Haunter - Jenseits des Todes" turns into an effective creepy movie, which tries to create suspense and some small surprises through the variation of well-known genre elements.

star actress Abigail Breslin ("Little Miss Sunshine") actually does her job very well. Only in moments that require a particularly intense play does she seem a little overtaxed. With Stephen McHattie ("Watchmen", "300") she has been assigned an actor who manages very well to be very charming on the one hand, yet at the same time also very frightening. The common scenes of the two, especially in the second half of the film, undoubtedly belong to the most exciting moments, which are only surpassed by some smaller, but very effective goose bumps of the more traditional kind.

In some scenes of "Haunter - Jenseits des Todes" Vincenzo Natali reveals the genius of his earlier works. In other moments, on the other hand, he increasingly falls into a somewhat too conventional gait, which ultimately prevents the movie from making a lasting impression. As a fan of supernatural horror films one is entertained very well for 90 minutes. But unfortunately there is no lasting wow-effect, as you experienced in the comparable movies "The sixth Sense" and "The Others". If you want to lower your expectations a little bit and don't want to be offered more than a solid genre entertainment, which is especially convincing in terms of atmosphere and actors, you can't go wrong with this DVD. Worth seeing!

Picture + sound: The clean picture of the DVD has a good overall sharpness, which, however, shows some small weaknesses in the detail display in the numerous darker scenes here and there. But the dark atmosphere of the story was captured very well by the visual implementation. The sound has some atmospheric surround effects, but they are not spectacular overall. The dialogues are easy to understand, but also very centrally mixed. All in all, that's enough for a decent one: Good!

Extras: There are two audio comments on the film, the first by director Vincenzo Natali, the second by screenwriter Matthew Brian King. Since there are very interesting moments in both comments, but also some overlaps, it becomes clear at the end that a common comment would have been the better variant. Beside the two comment tracks there is also a look behind the scenes (approx. 19:51 min.), as well as the complete storyboard of the movie. Good.

Result: "Haunter - Jenseits des Todes" mixes elements from "Und täglich grüßt das Murmeltier" and "The sixth Sense" or "The Others" to an atmospheric and exciting mystery thriller, which comforts with some felicitous goose bumps over a few shorter lengths. Certainly not the best film by Vincenzo Natali, but still an exciting and well played genre representative who presents himself on DVD in harmonious picture and sound quality. Despite minor dramaturgical weaknesses, there is still one that is absolutely deserved: Recommended!