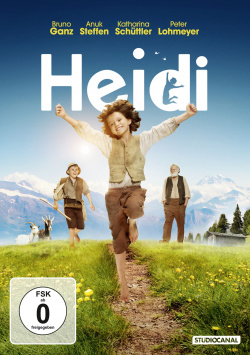 Film: It is a story that every child in Germany has known for generations: The orphan girl Heidi (Anuk Steffen) is brought to her grandfather, Almöhi (Bruno Ganz), in the Swiss mountains. After some initial difficulties, Heidi lives a happy time here, makes friends with the goat peter (Quirin Agrippi) and also grows fond of her cranky grandfather. But the idyll doesn't last long, because Heidi is brought by her aunt Dete to Frankfurt, where she is to be educated to become a well-behaved, educated young lady in the house  of the wealthy Mr. Sesemann (Maxim Mehmet). At the same time she should be a good friend to Klara (Isabelle Ottmann) who is sitting in a wheelchair. Although Heidi makes an effort and actually develops a friendship between the unequal girls, the girl in the big city is simply unhappy. She wants to go back to her grandfather, back to the mountains - as fast as possible…

The stories about "Heidi" invented by Johanna Spyri are over 130 years old, but are still timelessly beautiful and fascinate young and old. No wonder, then, that the material is repeatedly adapted for television or cinema. For many, the cartoon series from the 1970s is the most successful implementation, a piece of eternal childhood whose title melody is known to everyone even after more than forty years. Others may prefer the very early film version from the late 1930s starring children's star Shirley Temple or the Disney film version from the 90s starring Hollywood stars Jason Robards and Jane Seymour. The selection of different Heidi incarnations is so large that you have to ask yourself seriously: Do we really need another movie?

However, already after a few minutes it becomes clear that the remake of Alain Gsponer ("The Little Ghost") has definitely become a great enrichment for the oversized "Heidi" universe. Gsponer presents an extremely lovable production, which adapts itself exactly to the spirit of the original and thus maintains a pleasant timelessness. He manages well to avoid wanting to chum up the young target group too much. Fast cuts, cool sayings or a trendy soundtrack - everything that you unfortunately get to see far too often, especially in German children's films, is deliberately omitted here. The humor is never exaggeratedly silly, but simply sweet. And because almost all the figures don't seem too exaggerated, real emotions can also arise.

This is especially true for the moments between Heidi and her grandfather, who is wonderfully embodied by Bruno Ganz. If his Heidi is taken away from him, then even as an adult spectator you still have to swallow a lot. Only Katharina Schüttler plays as Miss Rottenmeier a little too exaggerated, but this is picked up again by her colleagues - such as a very charming Peter Lohmeyer as house servant Sebastian. The children's actors also deserve great praise, as they consistently do a good job and thus offer a good identification surface for the young spectators.

This new "Heidi" is not only a successful adaptation of the popular book classic. It is also a really beautiful children's and family film, which can convince with a great camera work, good actors and a reasonable narrative speed. It's nice that there are still such timelessly beautiful stories in such a target-group-oriented implementation. That clearly deserves an "Absolutely worth seeing"!

Picture + Sound: The picture is particularly striking for its great coloration. This makes the already very nice landscape shots even more inviting and the emotional warmth of the story is also made visually noticeable. The rest of the time, too, the realization of the picture can please with a good overall sharpness and harmonious contrasts. The sound is dominated by dialogues and music, with harmonious ambient noises and some nice sound effects providing some movement in the surround range. Good.

Extras: The DVD has a proper look behind the scenes (approx. 30:02 min.) consisting of interviews, film clips and some shots from the shooting. In addition there is a promo-making of (approx. 9:54 min.), some edited scenes (approx. 7:37 min.), concept drawings (approx. 1:00 min.), 2 featurettes (3:45 + 3:08 min.) and the trailer for the film. If you have seen the longer Behind the Scenes Feature, you can give yourself the Making of and the two Featurettes, because only already discussed information is repeated here.

Fazit: Alain Gsponer's "Heidi" is a very nice remake of the well-known and often adapted material, which can convince with a lot of heart, good actors and a good portion of humor. On the DVD, the cinema success is presented in good picture and sound quality and the disc is also convincing in terms of extras. Altogether there is a clear one: Absolutely recommendable!