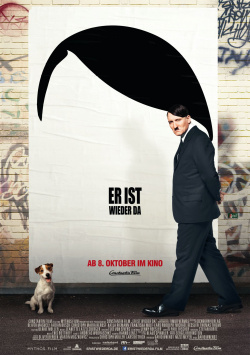 What if…? With this actually very simple initial situation, author Timur Vermes has caused a sensation in 2012. The result was over 2 million copies of "Er ist wieder da" sold in Germany and the frequently asked question: Is it allowed to make fun of a person like Adolf Hitler? The bitterly evil satire by Vermes gives a very clear answer: Yes, if the whole thing is not just pure slapstick and unimaginative slapstick, but also inspires reflection and remembrance. For even if many do not want to admit this to themselves, Hitler's crimes and the terrible ideas that he has spread are by no means a completely reappraised past, but unfortunately still deeply rooted reality in some people's minds. And this can and must be countered with satire.

However, a quite complex book like this can also be adequately filmed? The answer, unfortunately, is no. No question, David Wnendt ("Warrior", "Wetlands") was a highly talented director who had the courage to detach himself clearly from the book in certain aspects in order to create something entirely his own with relevance to contemporary politics. Yet the story remains essentially the same: 70 years after his death, Adolf Hitler (Oliver Masucci) awakes in contemporary Berlin, where he is discovered by chance by the young filmmaker Fabian (Fabian Busch), with whose help he becomes a television star. The film has many very successful aspects. Oliver Masucci, for example, disappears completely in his role, which he plays pleasantly cliché-free. In addition, the whole thing works really well as a biting media and social satire in some moments.

Wnendt manages to show in an almost frightening way how easily Hitler could become popular again through a certain charisma and eloquence ("Somehow he's right about what he says"), even if everyone assumes that he's a comedian who merely parodies the Führer. Here, the movie plays out a big strength and really makes you think, without giving up its entertainment value. The staging only becomes problematic if documentary scenes are woven into the play scenes in which "Hitler" has mixed with the common people. Here, the film creates a too one-sided picture of the typical brown German, who gives off some right-wing crap either through excessive alcohol consumption or lack of education. This is a bit bitter if you cut pictures from the World Cup fan mile into such scenes. So, fans who are enthusiastic about waving the German flag (whether they want it or not) are immediately pushed into the right corner. In the midst of some really frightening revealing sequences such a cut just seems a bit cheap. Not everyone who is proud of his country is right at the same time and would follow Hitler thoughtlessly if he actually returned.

Apart from that, some gags in the play scenes are extremely flat and lack the satirical depth of the book template. The idea that the whole thing becomes a movie in a movie at the end, on the other hand, is a very clever decision that can compensate for some weaknesses. But all in all "He is back" offers a somewhat unbalanced overall picture. There are some great moments and a really good Oliver Masucci, which contrast with really flat jokes and (with few exceptions) a one-sided orientation in the documentary scenes. Many really good possibilities remain unused or are implemented too hesitantly. Still: the good moments predominate at the end and make the movie even more worth seeing, despite some drawbacks. The mere fact that the film inspires reflection and discussion on a very important level justifies the purchase of a cinema ticket in any case!