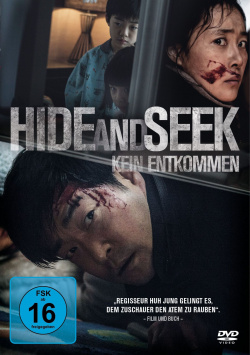 Film: Sung-soo (Son Hyun-Joo) leads a happy life with his wife Min-ji (Jeon Mi-seon) and his two children Ho-se and Soo-ah. Although he is plagued by nightmares and suffers from extreme neuroses, Sung-soo doesn't want to miss his life in prosperity. But the pretty facade, which he has painstakingly built up, threatens to break when he receives the news that his brother, whose existence he even concealed from Min-ji, has disappeared without a trace. In the dilapidated residential complex, where the ex-convict has recently been at home, Sung-soo sets out to search for clues about his brother's whereabouts. But apart from extremely discreet neighbours and strange signs on each of the apartments, he finds nothing. But he has no idea that his visit to the block of flats has put himself and his family in grave danger. When the mysterious drawings also appear at his luxury apartment, horror breaks over the family idyll...

"Hide and Seek - No Escape" is a gripping thriller that draws much of its suspense from its threatening and very dark atmosphere. After a very oppressive intro, director Huh Jung first of all reduces the tempo considerably. But this does not diminish the voltage, which increases more and more after about half the runtime. Huh Jung manages very well to vary the motives of common home invasion thrillers in such a way that the viewer is skilfully misled until the last act despite some clear hints. The identity of the motorcycle helmet wearing killer seems to be quickly clear. But even though the resolution was very obviously prepared in retrospect, it still provides a really good surprise.

This is quite a little trick due to the fact that Huh Jung actually adheres very closely to the rules of the genre. The story, which is based on a true event, is very cleverly constructed, which at first isn't really noticeable because of the very slow narrative tempo. But when you start to think about the individual pieces at the end, it becomes clear how well the individual puzzle pieces fit together to form a gripping whole.

"Hide and Seek - Kein Entkommen" is not necessarily something for friends of action or extremely bloody thrillers. But for those who like dark atmospheric psychothrillers and for whom long shots and few dialogues aren't synonymous with boredom, this South Korean home invasion thriller of a different kind can be warmly recommended. Worth seeing!

Picture + sound: The picture of the DVD pleases with a neat overall sharpness and a very atmospheric colouring. Since the black values and contrasts are also well balanced, the oppressive mood of the pictures can unfold fully. The Dolby Digital 5.1 mix is primarily dominated by dialogues and is rather unspectacular overall. In some scenes, however, targeted surround effects not only provide a little dynamic in the multichannel range, but also a pleasant goose bump for the viewer. Good!

Fazit: "Hide and Seek - Kein Entkommen" is an atmospheric psycho-thriller that can build up gripping tension despite its rather slow pace. Director Huh Jung succeeds in doing this through an oppressive basic atmosphere and a twisty story that can convince until the finale. A somewhat different home invasion thriller, which can not only be warmly recommended to lovers of korean tension cinema. The DVD is technically well done and also has a worth seeing making of to offer. Recommended