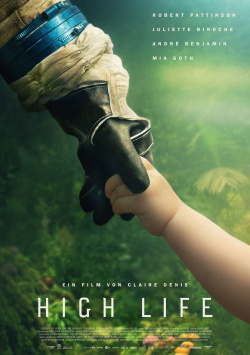 Away from Earth, in the dark depths of space, a spaceship has been floating for many years. Only two people live on board: Monte (Robert Pattinson) and his daughter Willow (Jessie Ross). In complete solitude, her routine daily routine is determined by the constant struggle for survival. The two are the only survivors of an expedition in which a group of criminals sentenced to death were sent into space in search of vital energy resources. Literally a suicide squad. But what happened to the other crew members? And is there any chance at all for Monte and Willow - especially since their spaceship is inexorably drifting towards a black hole?

With "High Life" French filmmaker Claire Denis presents her first English-language project. The premise sounds exciting, the ensemble is convincing and the visual language is really fascinating in some scenes. But unfortunately, the movie doesn't really have more to offer. Surely, there is a lot to be interpreted into the very leisurely narrated, loosely connected scenes. But even if there are some exciting philosophical approaches to be recognized, the completely cloistered staging is altogether too bulky and too off-beat to present the good ideas in an entertaining way.

Oh no, I said the U-word. Of course this is not possible for sophisticated Arthaus cinema. Intelligent, enigmatic and entertaining - an absolute no-go! Yes, there are actually some people who like to call themselves cineasts who see it that way. These cinemagoers - whom I do not want to deny a love of film here - do not want to believe that someone who simply wants to be entertained well in the cinema also appreciates the art of film. But I can assure all doubters: In the many years that I've worked as a film critic, I've seen many works that have done great to be clever and entertaining. The advantage: Their stories reach many more viewers than films like "High Life", which will only be accessible to a small niche audience.

That may sound derogatory, but it is meant differently. Because I simply find it a pity when exciting material and artistically interesting visual language are made almost inedible by overambitious stagings. That's exactly what happened here. "High Life" is neither exciting nor rousing, not staged in a gripping way, but simply tough and boring. Beautiful to look at and well played - but also emotionally completely undercooled. Anyone who likes sophisticated SciFi cinema and places little value on being able to build up an emotional connection to the characters and their stories will perhaps discover something in this work that I have been denied. That's why there's only one of me: Conditionally worth seeing!