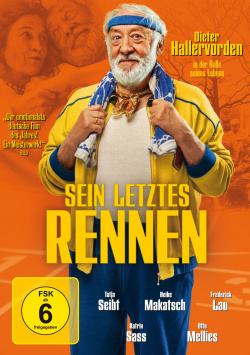 Film: Once Paul Averhoff (Dieter Hallervorden) was a great marathon runner who even won Olympic gold in 1956. But those days are long gone. Meanwhile the muscles are tired, the bones heavy and the hearing doesn't really want any more. But Paul does not want to be put on the sidetrack because of this. But after his wife Margot (Tatja Seibt) falls down several times, even stubborn Paul has to realize that they need help - help that her daughter Birgit (Heike Makatsch) can't give them just because of her job as a flight attendant. Paul reluctantly moves into an old people's home for Margot's sake. But singing and tinkering is nothing for the former Olympic champion. Instead of being treated like a rebellious child by the caregiver Mrs. Müller (Katharina Lorenz) or being hostile to Rudolf (Otto Mellies), the regular resident of the home, because of his critical remarks, Paul prefers to unpack his old running shoes and make his rounds in the park. He is quickly seized by the old fever, which finally breaks out when he beats the cheeky nurse Tobias (Frederick Lau) in a duel. Now Paul wants to know it again and plans to take part in the Berlin Marathon - and of course to win. But not only the dogged head nurse Rita (Katrin Sass) doesn't like that at all...

The fact that he cast Dieter Hallervorden in the leading role of "His last race" has to be highly credited to director Kilian Riedhof. Because it was to be feared that the actor and cabaret artist would still be so attached to his didi image that this would distract from the intensity of his play and that the actual qualities of the film would be lost. And indeed, in the first few seconds you can't prevent a quiet "Palim Palim" from shooting through your head at the sight of Hallervorderns. But then both the main actor and the director manage to make the comedian Didi disappear completely from the consciousness of the audience and Dieter Hallervorden become Paul Averhoff. And as such he really delivers a brilliant acting performance.

With a well-dosed mixture of humor and drama, the film manages to make its audience laugh as well as cry. The great Steven Spielberg once said that this is exactly what makes a good film. But it's not only the emotional effect on the audience that makes "His last race" such a worth seeing work. Without being too artificial or too instructive, Riedhof manages to tell a really nice story about the power of the human will, about dignified aging and about great love, and at the same time to make an amusing and biting commentary on the state of care emergency in Germany.

Sicherlich, at times the characters are a little clichéd, but the actors make up for this with good performances and obvious pleasure in the game. Also, the movie could be accused of the fact that the dramaturgy at times takes some predictable paths and at some points could have been a bit tighter. These are all understandable points of criticism, which, however, don't change the positive overall picture the movie leaves behind at the end. Kilian Riedhof, despite minor weaknesses, has simply succeeded in creating a beautiful work that is full of wonderful little moments, but which evoke great emotions.

Although "His Last Race" fits nicely into the series of numerous films from the last three years, which are conceived for a 50+ audience, it is not only older semesters who will enjoy this tragicomedy. Anyone who appreciates German entertainment cinema of the more sophisticated kind should do the same to Paul Averhoff, put on his running shoes and hurry to the nearest store to buy this DVD! Absolutely worth seeing!

Picture + Sound: The coloration of the very clean picture always appears natural and pleasantly powerful. But also the sharpness of the images and the harmonious contrasts ensure that the atmosphere of the story was visually well realized. The sound is a bit reserved due to the genre, whereas the dialogues sound well understandable from the speakers. Good!

Extras: The DVD presents the movie with two optional audio comments. In the first commentary, director Kilian Riedhof and leading actor Dieter Hallervorden talk about their first encounter, about the lengthy preparations that, according to Hallervorden, have done the film good in several respects, or about the shooting of certain scenes. In the second commentary, Riedhof is accompanied by his co-author Marc Blömbaum and the composer Peter Hinterthür, who also co-wrote the story at the beginning. There are some overlaps between the two comments, but overall the information content is very high.

Besides the two comments there are also promo interviews with Dieter Hallervorden (11:10 min.), Heike Makatsch (ca. 9:16 min.), Frederick Lau (ca. 8:26 min.) and director Kilian Riedhof (ca. 10:05 min.). Here, typical advertising hype dominates the action, but every now and then the interviews also offer quite interesting information about the making of the film.

Teaser, trailer and program tips round off the additional material of the DVD.

Fazit: "His Last Race" is a moving tragicomedy, which tells a very nice story and also presents a Dieter Hallervorden in top form. Touching entertainment cinema that can be warmly recommended not only to spectators of the 50+ generation. The DVD presents the film in appealing picture and sound quality and also has some informative extras to offer. absolutely recommended!