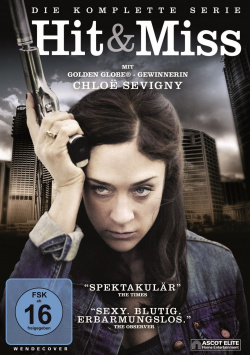 Contents: Mia (Chloë Sevigny) seems at first glance to be a normal young, attractive woman. But Mia has two great secrets that distinguish her from other women. First, she's a preoperative transsexual. On the other hand, Mia is a contract killer who executes her jobs with ice-cold precision. In her private life, she lives in complete seclusion in an abandoned warehouse. Only to the gangster Eddie (Peter Wright), from whom she receives her orders, she keeps regular contact. But a letter changes Mia's whole life: her former girlfriend Wendy tells her that they have a son together - eleven-year-old Ryan (Jorden Bennie). When Wendy dies of cancer, Mia is supposed to take care of Ryan and his half siblings Riley (Karla Crome), Levi (Reece Noi) and Leoni (Roma Christensen). But when she arrives at the remote farm in Yorkshire, where the family lives, and reveals her identity to the children, she is not welcomed with open arms. Especially Riley, Ryan's eldest sister, just can't get used to the idea of Mia as guardian. But Mia definitely wants to fulfill Wendy's last wish and has to come to terms with her different roles as head of the family and professional killer, as a man and as a woman. But this is made even more difficult for her by the brutal John (Vincent Regan), the owner of the farm and by a romance with the attractive Ben (Jonas Armstrong)...

With "Hit & Miss" Paul Abbott, who has already created such celebrated television fare as "Shameless" or "Mod on Page 1" (the template for the Russel Crowe film "State of Play"), has created a truly unusual concept. This is the result of Abbott combining two ideas lying on his desk into a series: that of a hit man and that of the transsexual mother of a family with five children. Two concepts that don't really fit together. But Abbott and author Sean Conway have found a way by which the two unequal ideas together not only create a harmonious overall picture, but also, despite their somewhat absurd character, appear very credible and realistic.

The reason for this, apart from the good scripts, the atmospheric visual language and the sometimes quite drastic depiction of violence, is in particular the performance of the actors, above all Chloë Sevigny. At first the actress was unsure whether a man or a transsexual should play this role, but luckily she let herself be convinced to play this unusual character. The dissension that Mia embodies, not only because of her gender identity, makes Sevigny's intense play well felt by the audience. Not only the realistic looking penis prosthesis, which is used in the very relaxed nude scenes, but primarily body language and facial expressions show that in Mia both man and woman, both mother and killer, unite - and how much she wishes that this inner conflict has an end.

It is to be highly credited to the makers that they have told the story and all its dramatic storylines with a gloomy seriousness and largely renounced humor. Only here and there a little dry and deep black British humour is recognizable. That's good, because a series about a transsexual hit woman could have easily become embarrassing silly. However, the makers always find the right tone here to maintain a certain credibility, which ties the viewer to the events, some of which are told in a very carried way, until the very end.

All characters show a great potential for development, which is why it would have been nice and interesting to see where their journey leads in a second season. But despite good reviews and enthusiastic viewer reactions, the first season of "Hit & Miss" will remain their only one. That's a shame, of course, because the series, shot in Manchester on a rather small budget, hasn't actually finished telling its story yet. Nevertheless, the audience isn't really left hanging in the air. There is a kind of cliffhanger, but in view of the fact that the series itself goes rather unconventional ways, it can also be seen as a fitting finale for the story. However, those who don't like ambiguous ends and would rather have everything clearly presented will certainly not be able to make friends with this outcome.

"Hit & Miss" is another good example of the fact that television today is in many cases more courageous and willing to compromise than cinema and can produce first-class acting, dramaturgical and technical quality. Certainly not for the broad mass taste, but anyone who appreciates British crime dramas of the dark kind, even if they still tread paths beyond the mainstream, can warmly be recommended this 6-part series. Worth seeing!

Picture + sound: The somewhat dreary, earthy color scheme, the well balanced contrasts and the good image sharpness capture the atmosphere of the series very well. The sound is mixed very powerfully, which is especially noticeable in the dialogues and the music, but also here and there in atmospheric ambient noises and harmonious surround effects. Altogether no audiovisual revelation, but absolutely successful for a TV production. Good!

Extras: As a bonus on the second DVD there are very detailed interviews with producer Juliet Charlesworth (approx. 18 min.), lead actress Chloë Sevigny (approx. 12 min.), series creator Paul Abbott (approx. 21 min.) and author Sean Conway (approx. 11 min.). In addition there is a Q&A moderated by the British TV presenter Mariella Frostrup (approx. 25 min.), in which Sevigny, Abbott and Conway as well as the executive producer Nicole Shindler took part. Altogether perhaps not quite so spectacular, but all the more revealing extras. Worth seeing!

Fazit: "Hit & Miss" is a very original and unusual series concept, which with its very direct, dark and sometimes also quite brutal execution unfortunately went too much against the mass taste and therefore will not be continued even after these six episodes. This may be more than a shame in view of Chloë Sevigny's outstanding performance alone, but it doesn't change anything about the high quality of this only short season. The mixture of thriller, drama and intensive character study is television on a very high level, which can be warmly recommended to lovers of sophisticated and unusual TV entertainment. Recommended