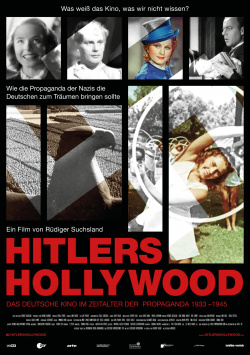 The Cinema - A Place of Everyday Escape, of Immersion in Dream Worlds. It's a place that attracts the masses - even more in the past than it is today. And that's why the medium film is also perfectly suited to manipulate the audience. And it was precisely this that the NS regime took advantage of in the period from 1933 to 1945. Over 1000 films were staged in this time in Germany. Most of them, on the surface, simply provided good, harmless entertainment. But guided by the National Socialist state, the manipulative power of the film was used specifically to awaken longings among the people and underpin their love of their homeland.

"Hitlers Hollywood" takes a fascinating look at this dark era of German cinema. Director Rüdiger Suchsland shows how technically perfect films triggered feelings in the viewers and how the meticulously planned Nazi propaganda machinery worked. It is fascinating to see how this has been achieved or what the impact has been on the careers of some actors and actresses, as well as directors and writers. Using numerous examples, Suchsland shows what power cinema can have, even if you don't want to see it at first glance. For surprisingly few of the films made during this period are open propaganda works. Many other stripes from this dark epoch may seem almost insignificant in comparison. And yet: there was actually no film that was not commissioned or approved by the regime - and so each individual film had one goal: To manipulate the German people, to keep them quiet or to build up enemy images.

The strong discrepancy between the artistic demands of many of the films from this period and what they say in a contemporary historical context makes "Hitler's Hollywood" so interesting. But the documentary also shows that there were not only followers and yes-men for whom their careers were more important than their artistic integrity and ethical sensibilities, but that there were also resistance fighters and rebels here and those who did not want to be part of this propaganda machine and therefore left Germany.

"Hitlers Hollywood" is a gripping piece of time and cinema history that is rousing, interesting and illuminating. A really good documentation, which deserves a clear "worth seeing".