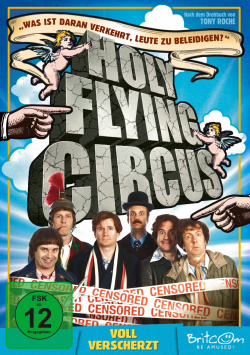 Contents: When the members of the British cult troupe Monty Python released their 1979 movie "The Life of Brian" after several financing difficulties and internal disputes, John Cleese (Darren Boyd), Michael Palin (Charles Edwards), Eric Idle (Steve Punt), Terry Jones (Rufus Jones), Graham Chapman (Tom Fisher) and Terry Gilliam (Phil Nichol) thought they had survived the worst and could now look forward to the premiere in a relaxed manner. But it shouldn't come to that. Because even before even one minute of the film was shown somewhere, religious associations in particular were running a storm against the comedy. Guardians of morals and moralists of all kinds came crawling out of their holes, united in the will to prevent the publication of the work. And so the Pythons have no choice but to face the public discussion. In a BBC interview Cleese and Palin want to talk to the bishop of Southwark about the controversy and defend their point of view. It's a performance that will make TV history...

"Holy Flying Circus" takes a big risk: not only does the film cover one of the most exciting chapters in the Monty Pythons' career, while revealing the tensions within the comedy troupe. Director Owen Harris simultaneously tries to pay tribute to the unique style of the Pythons. He wants to achieve this by not staging his film as a typical biopic, but presenting it as a comedy in the weird Python style. There are some completely surreal animations and the actors of the pythons also appear in some other roles. Charles Edwards, for example, appears not only as Michael Palin, but also as his mother, Terry Jones actor Rufus Jones also gives Palin's wife and Steve Punt gives not only a convincing Eric Idle, but also a bishop, a demonstrator or a rabbi.

Harris doesn't reach the level of Monty Python, their style is simply too special for that. Yet, he manages very well to capture the spirit of the Pythons and to turn his movie into a really well done tribute to the ingenious cult group. The very good selection of the main actors is also responsible for this. In order to reveal how well they meet their role models, you should definitely watch this film in the English original. Especially Darren Boyd not only gives a perfect John Cleese externally, but also vocally and mimically. Just great! But also Charles Edwards and Steve Punt meet their prominent role models to the point, whereas Edwards succeeds perfectly in capturing Palin's friendly, witty and at the same time very specific way, especially in the reenacted version of the legendary TV discussion.

There are some gags every now and then that don't really work. For example, the character of Alan Dick seems to be overdone and some of the more bizarre moments seem to be a little bit stressful. But overall "Holy Flying Circus" has become a very entertaining and dramaturgically interesting comedy about the controversy surrounding the cult movie "The Life of Brian". Absolutely worth seeing for all Python fans - especially in the English language version!

Picture + Sound: The clean image of the DVD pleases with a harmonious color scheme, a tidy image sharpness and well balanced contrasts. Especially in the brighter scenes no obvious weaknesses can be detected. In darker moments, on the other hand, slight image noise is noticeable here and there. The sound is present in a rather reserved Dolby Digital 5.1 mix, which, however, more than satisfactorily fulfils its main task of powerfully reproducing the dialogues. Good!

Extras: As a bonus there are almost 30 minutes of edited scenes and outtakes to watch, whereby there are some really amusing moments to discover here! Worth seeing!

Result: "Holy Flying Circus" is an entertaining look at one of the most exciting chapters of Monty Python's career. But in the dramaturgical realization of the controversial "The Life of Brian", the makers of the film were not only concerned with getting as close as possible to the real role models in the portrayal of the people involved, above all, of course, the pythons themselves. The production was also intended to pay tribute to the unique comedic style of the comedy troupe. And even if that doesn't always work one hundred percent, "Holy Flying Circus" is an absolutely worthy, wonderfully bizarre homage to Monty Python, which fans shouldn't miss. absolutely recommended!