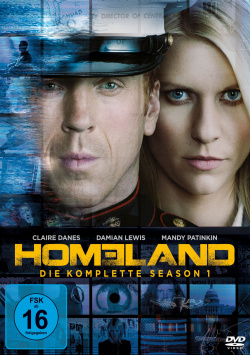 Film: After her husband Brody (Damian Lewis) was declared dead eight years ago during his mission in Iraq, Jessica (Morena Baccarin) slowly started to accept her loss. Since one year she has a relationship with Mike (Diego Klattenhoff), an old naval buddy of Brody, who she keeps secret from her two children Dana (Morgan Saylor) and Chris (Jackson Pace). But just when she decides to end the secrecy, she receives shocking news: Brody was found alive and liberated during the storming of a terrorist camp. Torn between joy and fear, Jessica tries everything to make her husband's return to his old life as easy and pleasant as possible. But this proves to be much more difficult than Jessica initially believes. Because the many years in captivity have changed Brody. So much so that she hardly recognizes him in some moments.

While Brody is celebrated throughout the country as a hero, CIA agent Carrie Mathison (Claire Danes) is on his heels. Ten months ago, during a mission in Iraq, she had been informed that terrorists had succeeded in "turning over" a US soldier. Carrie's convinced Brody is that soldier. Although even her mentor Saul Berenson (Mandy Patinkin) doesn't believe in Carrie's conspiracy theory, the agent, dreaded for her unconventional methods, wants to prove at all costs that Brody poses a serious threat. With the help of listening specialist Virgil (David Marciano), Carrie dives into the soldier's life, which has unexpected consequences when she meets him personally...

"Homeland" is based on the Israeli series "Hatufim - In the skin of the enemy". However, only the initial idea was adopted for the US adaptation. Series developers Howard Gordon and Alex Gansa, who have worked together on series such as "X-Files" and "24", have given their version of the exciting story its own unique character, which was achieved by the excellent drawing of the main characters alone. The manic-depressive agent Carrie Mathison, excellently played by Claire Danes, is a perfect example that genius and madness are indeed often close together. Although she tries to suppress her illness with medication. But the more she encounters resistance from her superiors and the deeper she gets entangled in her hunt for evidence that Brody is a sleeper, the more madness seems to take possession of her. This makes this character extremely interesting and her relationship to other characters, especially to Brody, very exciting.

Damian Lewis ("Life") as alleged terrorist, Mandy Patinkin ("Criminal Minds") as Carries mentor or Morena Baccarin ("Firefly", "V") as wife in the emotional dilemma make the series a real treat on an acting level. The sophisticated dramaturgy reinforces this in an impressive way. The story is told thrillingly, leads the viewer a little bit astray again and again and especially towards the end of the season it creates some nerve-racking moments of tension. Some critics accused the series of being a very one-sided enemy, which cannot be fully understood on closer inspection. Of course, "Homeland" also plays with some currently somewhat overused clichés. But not only Islamist terrorists are the enemy. On the contrary, the US government, the secret services and other groups are not there as the radiant heroes they would like to appear as. And this is exactly the strength of the series: it's never quite clear where the greatest danger comes from and who manipulates whom where with what.

Accusing the series for being too one-sided is just as wrong as accusing it of unnecessary scaremongering. After all, "Homeland" isn't a documentary, but a fictional entertainment series, a thrilling thriller, whose most important task is to captivate the viewer. The fact that this was also achieved in a very clever way and, apart from a few small lengths in the middle part of the season, almost throughout, speaks of the high quality of the series. Thus, at the end the positive overall impression can triumph over minor weaknesses and dramaturgical criticisms, so that one can say with a clear conscience about the 1st season: "Homeland" is television entertainment at a very high level. After "Game of Thrones", another example of the fact that TV series no longer need to hide behind expensive cinema productions and in many cases are even superior to them. Absolutely worth seeing!!

Picture + sound: The picture of the DVD presents the series in very good quality. The sharpness of the image allows even smaller details to be clearly seen, especially in the brighter outdoor shots, and there is hardly any loss of quality even in dark moments. The contrasts and the atmospheric colouring also support the positive overall impression of the visual implementation. This is more than satisfactory for a TV production. The same applies to the Dolby Digital 5.1 Mix sound, which reproduces the dialogues clearly and comprehensibly and also ensures movement in the surround channels time and again with smaller ambient noises and good sound effects. Good!

Extras: As a bonus the season box has some cut scenes (approx. 13 min.) to three episodes and a prologue to the second season (approx. 4 min.) to offer. There is also a quite extensive Making of (about 33 min.), in which makers and actors talk about the different aspects of the production. In addition, there is an audio commentary on "Der Verdacht", which Claire Danes, Damian Lewis, Howard Gordon and Alex Gansa recorded together. A very entertaining and informative commentary, with optional German subtitles. Gut!

Fazit: The first season of "Homeland" is sophisticated TV entertainment of a particularly exciting kind. Although strictly speaking the series is only a remake, it has its own character, which is achieved by the sophisticated dramaturgy and the interestingly drawn characters. In spite of some small lengths a consistently exciting and excellently played relay, whose final makes waiting for relay 2 a real test of patience. A series with high addiction potential and therefore especially on DVD: absolutely recommendable!