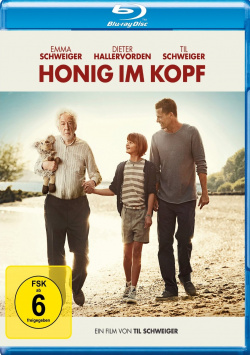 Honey in the head - Blu-ray

Film: Since the death of his wife Amandus (Dieter Hallervorden) is dismantling more and more. More and more he forgets things and becomes a burden for his son Niko (Til Schweiger) and especially for his daughter-in-law Sarah (Jeanette Hain). She would rather deport the old man to a nursing home today than tomorrow - a thought Niko doesn't really want to make friends with yet. Especially since his daughter Tilda (Emma Schweiger) has a very special relationship with her grandfather. While her parents argue more and more often, the eleven-year-old girl enjoys every second she is allowed to spend with her beloved grandfather. When she understands what it means to have Amandu's "honey in his head", she wants to fulfill his greatest wish: to see Venice! And while Niko and Sarah are only busy with themselves, Tilda and Amandus sneak out of the house and embark on an adventurous journey, always in a race against the constantly progressing forgetting...

With "Honey in the Head" Til Schweiger has once again hit the nerve of his audience. The film was able to attract over 7 million viewers to the cinemas - and most of them were absolutely thrilled by the touching story. It's actually the case that "Honig im Kopf" is Schweiger's most mature and best film so far from a dramaturgical point of view. However, it should never be forgotten that this is not a documentary drama, but an overdrawn entertainment film - even though some aspects of the Alzheimer's topic are depicted realistically and authentically. If you accept that, you will also be able to overlook some of the somewhat flatter or striking moments.

Actingly Dieter Hallervorden makes sure that the audience is served great cinema here. Hallervorden plays the role with a sensitivity that the script sometimes lacks. All in all, the film suffers from the very weaknesses that Til Schweiger has always had in his function as a director. Subtleness simply isn't its strength - and that's exactly what the movie could have handled very well at some points. Schweiger also likes to go over the top when it comes to humour. Sarah's reaction to Amandus' "gardening" is to say the least silly and frighteningly exaggerated. And also the noble garden party culminates in a completely unnecessary fireworks finale, which is simply badly implemented. Because the fact that the person responsible for the fireworks pisses calmly into the hedges while the first fountains are already going up next to him, and he doesn't seem to notice it, just so that there can be as spectacular a slow motion sequence as possible a little later, doesn't exactly testify to high directing art.

Some completely unnecessary scenes, which actually only serve to let as many prominent guest stars as possible appear, cloud the otherwise very positive overall impression as well as tenacious side plot strands. Here 20 minutes of the scissors could have fallen victim to without the story suffering - on the contrary! The background of scenes with pop songs that somehow always sound the same, so popular for Schweiger films, also lacks a creative further development by filmmaker Til Schweiger. But even if all this may be justified points of criticism, it is actually completely pointless to cite them. Because fans of Til Schweiger - and there are many of them - don't mind that. They like the movies the way they are. And even though this can't be comprehended by everyone and some find it sad that very good stories under Schweiger's direction can never unfold their full potential, his films have their raison d'être precisely because of their extremely high popularity.

"Honey in the Head" may not be a perfect film. At times it may not even be a very good film. But he hits his target audience right in the heart, gives them two hours of great emotions and a wonderful Dieter Hallervorden. And that's exactly why there were not only more than 7 million enthusiastic viewers in the cinema, but also for the home cinema version a deserved one: Worth seeing!

Picture + Sound: The typical Til Schweiger films meanwhile alienated, in warm sepia tones dipped coloring comes to the fore on the Blu-ray. The image is also very clean and the overall sharpness is on a good to very good level. The DTS-HD Master Audio 5.1 is also convincing. The fact that the music is sometimes mixed too loudly is also one of Til Schweiger's favourite stylistic devices and should therefore not be evaluated as negative (at least not in technical terms).

Extras: The good bonus offer begins with an informative audio commentary by Til Schweiger and screenwriter Hilly Martinek. In the commentary, Schweiger reveals an undreamt-of knack for fine irony. Besides there are of course a lot of the usual songs of praise for actors, crew and themselves. But the commentary is not uninteresting in many places. For fans absolutely worth listening to and informative. A nice team film (approx. 14:44 min.) captures the atmosphere during the shooting and introduces the members of the film team. Nine short behind-the-scenes clips then offer an insight into the actual shooting of certain scenes (approx. 13:37 min.), before some amusing outtakes (approx. 16:38 min.), the trailer for the film and two music videos round off the additional package. Gut!

Fazit: "Honey in the head" is with over 7 million cinema-goers one of the biggest successes for Til Schweiger. Despite all (partly justified) criticism he seems to hit a nerve with the audience. And even though the movie has unnecessary lengths and some obvious handicraft flaws, the story touches many viewers so much that they like to ignore it. A movie doesn't have to be perfect and doesn't have to please everyone in order to be a complete success. And you can't really deny that "honey in the head". The audiovisual implementation of the Blu-ray is absolutely harmonious and the bonus material should satisfy every fan. But there is also a deserved one for that: Recommendable!