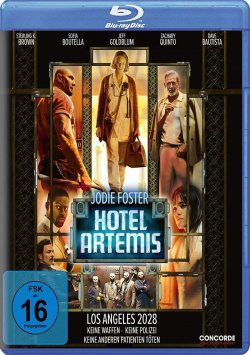 Film: Los Angeles in the not too distant future: Chaos and anarchy reign on the streets, a civil uprising is imminent. Waikiki (Sterling K. Brown) and his team want to exploit this situation for a bank robbery. But the plan fails and for Waikiki and his seriously injured brother there is now only one safe place left: the Hotel Artemis, a secret hospital for criminals. The fact that this place can exist at all is due to the fact that the director (Jodie Foster) has always persistently demanded that her "guests" observe certain rules. So far this has worked - but unfortunately Waikiki's brother took something from the raid that a particularly powerful and unscrupulous man wants back. And whether his henchmen will abide by the rules of the Hotel Artemis seems questionable…

"Hotel Artemis" is essentially a very good thriller with cult potential. Well, the hospital with its rules already reminds very strongly of the gangster hotel in the "John Wick" movies. But detached from that, this gloomy vision of the future has some really good ideas and atmospheric pictures, which actually give the film a great cult potential. The problem is that director Drew Pearce has set his sights exactly on that. It seems as if he wanted to create a cool cult film with all his might, whereby his staging lacks exactly the casualness that would have been necessary for the concept to work. However, Pearce meanders indecisively between hysterical jokes, dark drama and brutal thriller and loses sight of the already thin story more and more.

When the action starts to move towards the end, it's already too late. It's not necessarily the actors. Jodie Foster is really good as a resolute head nurse with panic attacks, Sterling K. Brown from the drama series "This is Us" proves to be quite a cool sock, Dave Bautista is perfectly cast as a muscle package with an iron will to survive and Jeff is Goldblum - Jeff is Goldblum. The only negative thing that stands out is that Charlie Day ("Kill the Boss") acts even more hysterical than usual, and that Sofia Boutella is only allowed to play one more variation of the role she became famous for in "Kingsmen".

Good actors, a promising initial idea and a really good visual implementation help to make "Hotel Artemis" worth seeing in the end. However, these positive aspects make it even more apparent that there are some obvious weaknesses in the script and the direction, which are responsible for the fact that this action thriller can become the cool cult movie that it obviously wants to be. This is simply disappointing, but still entertaining enough for an entertaining home cinema evening. Worth seeing!

Picture + sound: The Blu-ray image pleases with a high sharpness of detail. Although the action is held in rather darker tones, hardly anything at sharpness gets lost through it. In very dark moments, at most minimal image noise can be detected. Overall, however, the picture also leaves a positive overall impression due to the atmospheric colouring and the neat contrasts. The DTS-HD Master Audio 5.1 Mix can unfold its full power especially in the last act. There's a lot of noise at home theaters when there's gunfire and explosions. Good.

Extras: Unfortunately you don't get a lot of bonus material here. At least there's an audio commentary by director Drew Pearce and producer Adam Siegel that's really worth listening to. The two men talk excitedly about the making of the movie and deliver some very interesting details. In addition there are about 19 minutes of promo interviews with Jodie Foster, Dave Bautista and Jeff Goldblum.

Fazit: "Hotel Artemis" has unfortunately not become the cult film he would so like to be. But despite some weaknesses the futuristic gangster thriller is exciting and entertaining enough to guarantee an entertaining home cinema evening. The Blu-ray is technically well implemented, the bonus material, on the other hand, is somewhat lean. All in all this is enough for one: Recommendable!