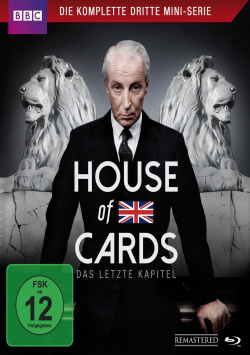 Contents: The reign of Prime Minister Francis Urquhart (Ian Richardson) is slowly approaching its end. But since he is tormented by the fact that Margaret Thatcher was even given a monument because of her politics, Urquhart also wants to secure his place in the history books before his departure. But as the resistance within his own ranks against his policies grows and his former foreign minister Tom Makepeace (Paul Freeman) openly opposes him, the air becomes increasingly thin for the prime minister. But with a historic peace treaty for Cyprus he still wants to secure his political immortality. But a dark chapter from his past and some dramatic wrong decisions could destroy this dream faster than he would like to...

After the great success of the US adaptation of "House of Cards" with Kevin Spacey, the British original has now finally made it to Germany on DVD and Blu-ray. After the first two mini-series after the novels "Ein Kartenhaus" and "Schach dem König" by Michael Dobbs had already been published successfully in spring 2014, the adaptation of "Um Kopf und Krone" marks the end of the "House of Cards" trilogy with the great Ian Richardson as active Prime Minister Francis Urquhart. "The last chapter" is much darker and more serious than the two previous chapters, but also lets the biting cynicism shine through, which made the first two chapters so worth seeing.

Dobbs himself had his name removed from the credits this time, as he didn't like the fact that the makers started the mini-series with Margaret Thatcher's (then still fictitious) funeral. But even if the author of the novel dissociates himself from this finale, this doesn't change the once again very high quality of this last mini-series. This is not only due to Andrew Davies' screenplay, which works out the machinations of the prime minister and the attempts of his opponents to overthrow him from his position of power in an exciting, clever and extremely entertaining way and leads him to the bitterly evil finale.

The high quality is of course also due to the actors, above all Ian Richardson, who as Francis Urquhart has delivered a top performance by which even an Oscar winner like Kevin Spacey still has to be measured. Especially when Urqhart turns directly to the audience with his cynical comments or meaningful looks, Richardson is also in top form in the third mini-series. But also his fellow players like Diane Fletcher as Urqhart's wife or Paul Freeman as his political opponent ensure that "Das letzte Kapitel" offers not only dramaturgical, but also theatrical TV entertainment in a class of its own. And despite a somewhat outdated aspect, it still works really well after almost twenty years.

Whoever liked the first two mini-series and is adjusting to the fact that a somewhat heavier keynote has somewhat suppressed the humorous bite should not miss this conclusion of the trilogy - even if it is only because of the really evil, very consistent finale. Absolutely worth seeing!

Picture + sound: The Blu-ray of the third mini series reveals a much clearer picture than the DVDs of the first two seasons. Although there are still some small discernible signs of aging and minimal contamination here and there, the overall impression is quite positive considering the age of the series. The image sharpness is at a good level, the colours are mixed harmoniously and the contrasts are also fully convincing in most scenes. The DTS-HD Master Audio 2.0 Mix sound is very front-heavy at most moments, with the dialogues sounding powerful from the speakers. A lot of movement is therefore not heard in the surround range. Nevertheless, for a TV production almost twenty years old, everything is absolutely fine. Good!

Extras: As with the first two mini-series, there is again an audio commentary by author Andrew Davies and the 2007 deceased leading actor Ian Richardson. And also this third common audio commentary is characterized despite some longer breaks again by a high information content, spiced with a pleasant pinch of dry humor. Not exactly a very extensive bonus offer, for interested viewers with a good knowledge of English it's worth listening to!

Result: The finale of the British "House of Cards"-trilogy is much darker and more serious than its two predecessors. Although the malicious cynicism of Francis Urquhart can still be felt here and there, this third and last mini-series is much more political drama than biting satire. Written first class and played excellently, the four episodes are a worthy and harmonious conclusion of an exciting story, which still works very well even in direct comparison with its current US remake. The technically well implemented Blu-ray is an absolute must for viewers who already liked the first two mini-series. And if you don't know the story of Francis Urquhart yet, you now have the opportunity to catch up on it in its entirety. Therefore: Absolutely recommended!