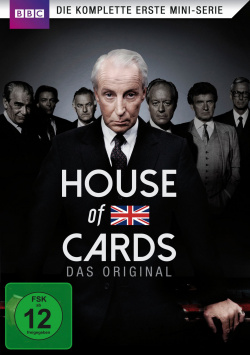 Content: Long before Kevin Spacey was able to reach his acting peak under the direction of great directors like David Fincher as Francis Underwood in the series "House of Cards", there was already an extremely successful adaptation of Michael Dobbs' novel "Ein Kartenhaus" in the 1990s. With Ian Richardson in the role of Francis Urquhart, a celebrated mini-series was created in 1990, followed by the adaptation of the follow-up novels "Chess the King" and "Around the Head and Crown". In the wake of the success of the US version of "House of Cards", the first two of these three mini-series are now finally available on DVD in Germany. And even though some aspects of the production may seem a bit antiquated, it becomes clear after only a few minutes of the first episode how little this British original has lost from its bite, its vicious wit and its suspense.

The first mini-series: The Thatcher era is over. After the conservatives won the election, Francis Urquhart firmly believes that the new prime minister will assign him a promised ministerial post. When this does not happen and Urquhart is to remain at his old post, the faction leader spins an intrigue that is supposed to bring him far more than just revenge. Any remedy seems to be right for him. He finds help with the young journalist Mattie Storin (Susannah Harker), whom he manipulates with every trick in the book for his bitterly evil game...

The second mini-series: Francis Urquhart can finally reap the fruits of his political intrigues. Although in his dreams he is always haunted by a dramatic event from the first mini-series, he always seems to keep a cool head on the outside. But then a new headwind blows in his face as England gets a new king. With his idealism and his dream of social justice, he is not only in stark contrast to the policies of the conservative government. He also seems to see through Urquhart's attempts to damage his credibility from the outset. Of course Francis Urquhart can't let this happen and so his talent for ice-cold tactics is needed again to put the king in his place...

More should not be revealed about the content of the two mini-series. Although there are strong dramaturgical parallels between the first mini-series and the first season of the US-series and some scenes were even taken over directly, there are enough differences that these award-winning multi-part shows are extremely exciting and thrilling even for those viewers who know the US-version. The mere fact that the British "House of Cards" is a mini-series results in a much more compressed narrative structure. The differences between the British and American systems of government and not least the technical and social changes of the last twenty years prevent the American new edition from appearing merely like a 1:1 copy of the British original. Despite many similarities, both variants are very independent productions with very individual strengths.

The greatest strength of the 1990 version is without question the great play by Ian Richardson, whose comments directed directly at the audience are so wonderfully biting and cynical that any other appearance of an outdated production is quickly forgotten. Especially in Urquhart's views and his manipulative calculation there is a timeless topicality, which even the lack of mobile phones and the Internet can't harm.

Both mini-series are self-contained and therefore work on their own - whereby the somewhat weaker, but still excellent second story also refers to the events of the first mini-series again and again. But even if both parts have a certain autonomy, it is only together that they produce the profound portrait of a charismatic and unscrupulous politician, for whom no struggle seems too dirty to reach its goals.

"House of Cards" is the perfect mixture of biting satire and captivating political thriller, between drama and British humour of the somewhat darker kind. Two timelessly good parts of a trilogy, the conclusion of which will be published this year. Absolutely worth seeing!

Picture + sound: The audio-visual implementation of the mini-series is its age clearly noticeable. The original 4:3 format picture shows slight noise, some blurriness and seldom even minor soiling, especially in the first mini-series. Although the series was digitally remastered, all age-related weaknesses could not be eliminated. This is also evident in the sound. Especially with the German soundtrack, a slight background noise can be heard every now and then, but this is usually drowned out by the quite powerfully mixed dialogues. The English soundtrack sounds cleaner and more harmonious overall and is preferable to the good synchronization itself anyway. For a TV production more than twenty years old, there is still one weakness despite all: Good!

Extras: The first episode of both mini-series includes an audio commentary by author Andrew Davies and lead actor Ian Richardson, who died in 2007, as a bonus. Because of Richardson's involvement alone, but also because of their information content, these two comments are absolutely worth listening to!

Result: The first two mini-series of the British "House of Cards"-trilogy are political satire at its finest, spiced with elements of the political thriller and the drama. Some aspects of the staging may seem a little antiquated after more than twenty years. But the entertainment value of the mini-series and their wonderfully cynical bite was not affected by time. With a great lead and some cleverly constructed twists, the machinations behind the scenes of the political circus of Great Britain are the finest TV entertainment for lovers of thrilling political thrillers and the slightly darker British humor. Even if you know the great US adaptation with Kevin Space, you won't get bored for a second, despite the overlapping content of the first mini-series. But there is - despite some weak points with picture and sound - a clear one: Absolutely recommendable!