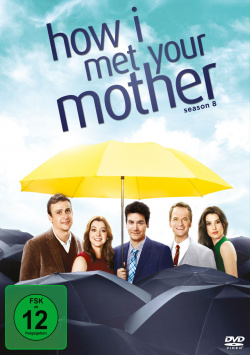 Content: Didn't your father promise you that he would only tell you a short story about how he met your mother? That was eight years ago - and he still hasn't arrived at the end. Well, but at least he's slowly but surely approaching the home stretch. So the new momentum of stories that Ted tells his children begins at the place where the fateful meeting will take place. But until then, there are still some small obstacles to overcome. So Marshall (Jason Segel) and Lily (Alyson Hannigan) also have to cope with their role as young parents in everyday life, which proves to be especially difficult when they have to look for a babysitter. Ted seems to have finally found love with his ex Victoria (Ashley Williams). But also with them the disillusionment begins with the everyday life. The relationship between Barney (Neil Patrick Harris) is also not under a good star and Robin (Cobie Smulders) has no luck with her new Nick either - especially since she is still attached to Barney. Soon the relationship merry-go-round is turned around and while Barney and Robin seem to be lucky at last, Ted has to overcome some hurdles before he finally meets the mother of his children...

"How I met your Mother" is slowly but surely approaching the home straight. With the end of the ninth season, the search for the mother of Ted's children will finally be over. But before it's time, there's the eighth season on DVD for the fans in Germany. And even if at the end of the last episode you finally get to see the first glimpse of Ted's dream woman, everything stays the same until then. That's not necessarily negative, because the chemistry between the characters is extremely good after all these years and the humor benefits from it. And even if you as a viewer have the feeling here and there that the stories go a little bit round in circles and that some plot elements are exhausted, the series itself still works really well in the year before last.

That's of course partly because of the many funny ideas with which these 24 episodes are peppered again. Whether it's the competition between Ted, Robin and Barney, which is all about presenting yourself to Marshall and Lily as the perfect godfather for little Marvin. Or whether it's Jeanette, who isn't quite as mentally unstable as Ted, who at first looks like the ideal woman for Ted, but then quickly turns out to be a really crazy stalker. Or whether it's the return of the captain (Kyle MacLachlan) who gives Lily a job but quickly reveals himself to be an extremely eccentric employer. And, of course, there are also many of Barney's escapades and the revelation of what happened to Robin Sparkles when the dark side of her soul was revealed when she was heartbroken. All these moments and many more make sure that even after eight years good laughs don't remain a scarce commodity.

But there's no question that the series wouldn't have been so successful over all the years and over all the somewhat weaker episodes if the actors didn't harmonize so well with each other. Jason Segel and Alyson Hannigan are just the perfect couple and it's really hard to imagine that they aren't the same in real life. Josh Radnor as hopeless romantic Ted is also perfectly cast and about Neil Patrick Harris as Barney you don't need to say a word anymore. He's just laying down - wait, it's coming soon - där!

Well, Season 8 is that Ashley Williams is back as Victoria for a few episodes. For many she was the perfect mother as it was really tingling between her and Ted and her short love story in season 1 was very, very cute. It was a beautiful, but also a courageous decision to bring this figure back again, because it was quickly clear that Victoria would not be the mother. A renewed end between Ted and Victoria could therefore also destroy the positive memory of their first strand of action. That almost happened in the decisive episode, since Victoria doesn't really show any sympathetic qualities here. But luckily the makers got the hang of it at the last moment and so allow the audience to keep them in their memories in a positive way.

"How I met your Mother" certainly doesn't win a prize for originality in the eighth year. And since there are always small sagging points, one would almost think that the series has long passed its zenith. But then the charming or extremely funny moments come again, which make clear why Ted, Barney and Co. are so popular with the fans. And as a fan it becomes clear to you that you will miss this troupe very much when they leave soon. But luckily it's still a year to go before then. Therefore: insert the DVDs of season 8, overlook the small weaknesses and simply spend a good and amusing time with loved characters. Absolutely recommendable!

Picture + sound: Everything stays the same here: The new episodes also shine on the DVD in a quality that can be expected from a contemporary comedy series. The picture is very clean and has a convincing overall sharpness. The powerful, very harmonious colours also leave a very positive impression. The Dolby Digital 5.1 mix is primarily limited to the reproduction of dialogues, music and laughter, which is implemented neatly and completely satisfactorily. Good!

Extras: Extras are included on all three DVDs in this season box. DVD 1 has to offer apart from distant scenes to three episodes (approx. 2:04 min.) still another audio commentary to the consequence "Farhampton" of the series creators Carter Bays and Craig Thomas. On the second disc there is beside distant scenes to five episodes (ca. 3:23 min.) a Making of to the episode "The dark side" (ca. 11:47 min.). The Robin Sparkles and Robin Daggers song "P.S. I Love you" gets a music video (approx. 2:41 min.).

DVD 3 also has some distant scenes to a total of seven episodes (approx. 4:52 min.) on board. In addition there are amusing outtakes (approx. 4:40 min.), as well as a worth seeing tour of the sets with Josh Radnor (approx. 8:56 min.), which shows the spectators the bar, Ted's apartment and the New York street scenery. Good!

Result: "How I met your Mother" is approaching the home stretch. Before it's finally over after the ninth season with the legen - wait, it's coming soon - comedy series, there are in Season 8 once again a lot of emotional confusion, threatening farewells, separations and a first look at the mysterious mother. This is not always as funny as in the first season, but the good level of season 7 could be kept loose. The DVD box presents the 24 episodes in the usual good picture and sound quality and for fans there are also some nice extras such as a Making of, Outtakes or a set tour with Josh Radnor to see. There is only one possible conclusion: absolutely recommendable for fans!