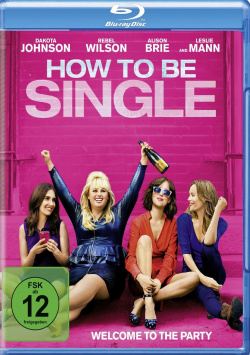 How to be Single - Blu-ray

Content: When Alice (Dakota Johnson) realizes at the end of her studies that she's never really been alone before, she makes a radical decision: she separates from her college friend Josh (Nicholas Braun) for a while and moves to New York with her sister Meg (Leslie Mann). Here she wants to concentrate on her job in a law firm and find out who she really is. But this plan fails because of her new colleague Robin (Rebel Wilson), who takes her on the very first evening on a merry pub crawl, which ends in the bed of bar owner Tom (Anders Holm). This finally throws Alice into an emotional chaos that threatens to escalate some time later when Josh tells her that he has found a new love. Now she is actually single and can handle the situation very badly immediately. While her sister is trying to have a baby, Womanizer Tom develops real feelings for Lucy (Alison Brie), who is on a desperate search for Mr. Perfect, and Robin only seems to have parties, Alice feels more and more lost - until she meets the smart businessman David (Damon Wayans Jr.)….

With "How to be Single" the German director Christian Ditter presents his second English feature film after "Love, Rosie". With a prominent cast and some successful jokes, Ditter has made it to the top of the German cinema charts with this comedy. With over 1 million viewers "How to be Single" was one of the surprise hits of the cinema spring 2016. The story the film tells is very conventional and makes use of several clichés. Whoever hopes for big surprises is out of place here. In addition, there should be a penchant for humour of the somewhat coarser kind. Rebel Wilson in particular, who once again plays exactly the character she has embodied in every one of her films so far, almost always targets her proverbs below the belt. It's too worn out to still be able to function. Some of her performances are still quite funny, but one wishes that she would also show another facet of her ability - if available.

But the film doesn't just tell Robin's story. There's also Alice, Meg, Lucy and Tom. And they provide a lot of variety. There are some really warm-hearted moments, wonderful romantic scenes and funny dialogues. And especially in the plot line around Tom and Lucy Ditter actually manages to steer a little bit against the expectations of the audience. This gives the whole a refreshing touch, which is underlined by the sympathetic play of most of the actors. Despite their obvious quirks, Leslie Mann and Alison Brie have the sympathies of the audience on their side very quickly. Dakota Johnson also plays well, but her character is just too one-dimensional to be really interesting for the viewer.

"How to be Single" is not a big litter. The comedy offers nice entertainment for fans of "Brautalarm" or "Sex and the City". Christian Ditter has made an amusing film about big city singles with a good sense for timing and for appealing pictures. Not only, but especially women can have fun with this film. Anyone who likes light US comedies with a slightly dirty sense of humour and a lot of heart can confidently acquire this charming New York romance. Worth seeing!

Picture + sound: The picture and sound quality of the Blu-ray corresponds exactly to what can be expected from a current cinema production. The picture is absolutely clean, the colour scheme is harmonious and the contrasts are also on a good level. The DTS-HD Master Audio 5.1 Mix present sound, as usual for the comedy genre, does not ignite a big surround firework. Dialogues and music are more in the foreground. But there is also always audible movement in the multi-channel range, which can create an overall very positive impression. Good.

Extras: As a bonus there is a short Making of Featurette on the Blu-ray about the pros and cons of single life (about 5:10 min.), as well as further short documentaries about Rebel Wilson (about 4:07 min.) and about the humor of the movie (about 6:05 min.). In addition there are five cut scenes (approx. 8:05 min.) and missed scenes (approx. 1:55 min.), as well as further outtakes by Rebel Wilson (approx. 7:37 min.).

Fazit: "How to be Single" is an entertaining comedy, which can score with some "Sex and the City" flair, rough gags and a good portion of romance. Sometimes the humor is a bit flat and some of the numerous storylines run more or less into nothingness. But all in all the film offers good entertainment for all viewers who like light US comedies with a rough undertone. The Blu-ray presents the hit movie in good picture and sound quality and also has some nice extras on board. But there is a clear one: Recommendable!