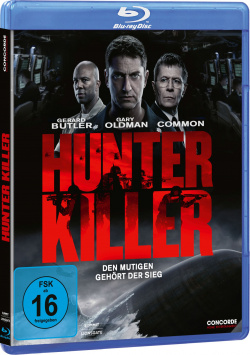 Film: When an American submarine gets into distress in the Arctic Ocean, this threatens to lead to an escalation between the USA and Russia. The experienced Captain Joe Glass (Gerard Butler) is supposed to save the submarine and its crew before it comes to the diplomatic super Gau. But when Glass evacuates the crew to his ship after a confrontation with a Russian submarine, it turns out that he has fallen into a dangerous conspiracy. A Russian general has the president in his power and is planning a coup that could destabilize the whole world. Now Glass, with the help of an elite Navy SEALS unit, must try to save the Russian president and uncover the conspiracy before it is too late…

"Hunter Killer" is based on a US bestseller by Don Keith and George Wallace. For many years there have been efforts to film the political thriller. Pierre Morel ("Taken"), Philipp Noyce ("The Hour of the Patriots") and later Antoine Fuqua ("The Equalizer") were involved in the project, but the film didn't materialize at first. 2016 then it could finally start. Gerard Butler, who fought for the film for a long time and was also involved as a producer behind the scenes, was joined by such illustrious actors as Gary Oldman or the late Michael Nyqvist. The film was shot on quite elaborate sets in London and Hong Kong, as well as on location in Bulgaria.

No question, director Donovan Marsh didn't shoot the best submarine thriller, but offers his viewers very good entertainment with successful moments of tension, decent action and convincing effects. Performers may not deliver Oscar-worthy performances, but they can make the most of their roles. And that is, measured by the clichés they have to fight, a respectable performance.

After a somewhat worn first third, the tension screw is clearly tightened. There are no big surprises, but Marsh manages very well to build up an atmosphere, in which even well-known plot elements still seem gripping and thrilling. Those who like action-heavy political thrillers will get their money's worth and will be entertained for two hours. Surely, the submarine thriller is - forgive me this pun - not particularly profound. However, this doesn't change the high entertainment value, which makes "Hunter Killer" really worth seeing at the end!

Picture + Sound: The Blu-ray pleases with a good overall sharpness, which also shows details well in the many darker scenes playing inside the submarines. The colouring is atmospheric and the depth of the picture is really good in some scenes. The sound is available in a powerful DTS-HD Master Audio 7.1 mix, which not only makes the dialogues sound easy to understand from the speakers, but also makes the action scenes really crack. Very good!

Extras: The bonus material is quite satisfying. Although the audio commentary by director Donovan Marsh is not subtitled, it offers some really exciting information about the preparations and the shooting for interested viewers with a good knowledge of English. You'll get to know more about this in three Making of Featurettes (ca. 36:52 min.), which deal with the work of the crew, the shooting and of course the actors. In addition there are interviews with Gerard Butler, Common, Gary Oldman and Michael Nyqvist (ca. 34:29 min.). Good.

Fazit: "Hunter Killer" offers perfect entertainment for home cinema. A thrilling action thriller, that has to struggle with some clichés, but packages them so entertaining that the two hours of running time fly by. Not a masterpiece, but a good remedy against the little action hunger in between. The Blu-ray is technically convincing and also brings quite worth seeing bonus material. But there is a very clear one: Recommendable!