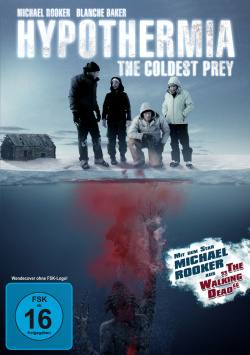 Content: It should be just a normal weekend at the lake for Ray Pelletier (Michael Rooker), his wife Helen (Blanche Baker), son David (Ben Foster) and his girlfriend Gina (Amy Chang). When ice fishing together in complete seclusion, the tensions between Ray and David should finally be reduced. But the trip is not under a good star. At first Ray breaks into the ice during an evening walk and can only save himself with great effort. And then he learns that his son wants to leave the USA with Gina to work as a development aid worker. But that's not all, the next day their peace is also disturbed by the rude Stevie Cote (Don Wood), who together with his son Stevie Jr. (Greg Finley) is setting up a mobile fishing hut directly on the ice hole of the Pelletiers. Ray already thinks this weekend is a disaster. But he doesn't suspect that the actual horror is yet to come - because under the ice lurks a dark danger, which is just waiting to break through the ice...

"Hypothermia" was already filmed in New York State in spring 2010, whereby most of the recordings were not made in the studio, but actually in icy cold at or on Great Scandaga Lake. The concept of the film is not bad and forms a good starting point for a classic monster film. Director James Felix McKenney seems to want to offer this to his viewers as well, since he relies on practical effects in the first place and largely avoids CGI recordings. This is really an advantage if the monster, which is still invisible to the viewer, leaves some unattractive wounds on the protagonists, which have really been very effectively realized.

Negative the practical effects in connection with the low budget have an effect when the monster can actually be seen. Although it's usually very dark and the fast cuts allow only short glimpses of the monster, what you can see is very trashy and unfortunately a bit ridiculous. The good intentions and the commitment of the makers in all honors, but this rubber stuff robs the film of any tension and transforms the solid monster film into an involuntarily funny laughing stock. The somewhat confused ending doesn't necessarily help to make up for this damage.

As the monster can only be really seen in the last ten minutes of the already very short 70 minute running time and the tempo, atmosphere and effects are also right until then, lovers of classic monster movies can definitely risk a look here. Even though the actors, with the exception of Michael Rooker, really only have B-movie qualities and the script is very cliché-laden, the icy horror actually works quite well in the first hour. And in the end there is a very limited, but nevertheless decent one: Worth seeing!

Picture + sound: Since only a data-reduced press sample was available for the test, the final picture and sound quality cannot be evaluated here.

Extras: Also the bonus material could not be seen on the press DVD. A Making of, two featurettes, a picture gallery and a trailer are announced.

Fazit: "Hypothermia" offers a good basic idea, which is implemented quite atmospherically at the beginning. The somewhat poor script and the somewhat clichéd characters don't really stand out in a disturbing way, either. Only with the appearance of the monster, which with its rather ridiculous appearance sets an inappropriate counterpoint to the seriousness of the production, does the film lose almost its entire tension potential in the last act. If you like classic monster horror, you might still have some fun with this horror thriller, because the movie has some good moments of suspense and some really bloody effects to offer. But for those who expect an effective shocker, the tension is replaced by bitter disappointment at the latest when they see the monster from the depths. Therefore the following applies: despite good atmosphere and anxious actors only conditionally recommendable!