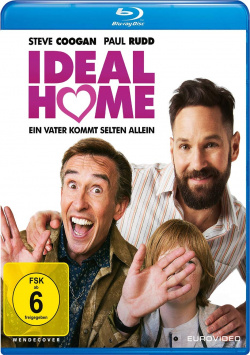 Film: The successful TV cook Erasmus (Steve Coogan) and his producer Paul (Paul Rudd) are not only a well-rehearsed team on set. Also in the private life the two are a couple, who enjoy their life full of prosperity and parties. Then one day the boy Bill (Jack Gore) stands in front of her door, Erasmus opens that he is his grandson. While his father is in prison, the two men have to take care of the boy. As substitute fathers against their will, they quickly reach their limits and the problems that have long been swirling under the surface of their relationship threaten to destroy the happiness of the men…

"Ideal Home - Ein Vater kommt selten allein" lives mainly from its two main actors. The Brit Steve Coogan is really wonderful as a TV chef in love with himself. The fact that his character serves some partly stereotypical clichés simply belongs to the eccentric, partly superimposed appearance of the TV personality. He can't just switch it off, even if the cameras aren't running anymore. This regularly drives his friend into madness, which Paul Rudd ("Ant-Man") embodies very sympathetically. The fact that he is a clear counterbalance to Coogan's character results in a thrilling dynamic between the two characters, which makes for some really good laughs due to the sometimes wonderfully incorrect dialogues.

Although director Andrew Fleming doesn't always manage to strike the right note in his mixture of comedy and drama and unfortunately gets lost in a very conventional dramaturgy, the film is still a lot of fun over long distances. Surely, the movie only gets close to a classic like "A cage full of fools" or its US remake, with which it can best be compared, in a few moments. Nevertheless, it offers enough scenes in which the viewer can smile amusedly or even laugh heartily.

Here the wheel is not reinvented and there is also no profound plea for same-sex parents presented. "Ideal Home - Ein Vater kommt selten allein" is no more and no less than an entertaining entertainment cinema, which here and there is a little bit of fun without really hurting anyone. In the end, it was quite harmless fun with two great main actors and therefore just the right material for a cosy home cinema afternoon. Worth seeing!

Picture + Sound: The picture pleases with a good, but not outstanding sharpness and powerful colors. Due to the genre, the sound remains rather reserved and concentrates primarily on the dialogues. These are particularly effective in the better original version. But all in all there is no reason to complain and therefore also a deserved one: Good!

Extras: Unfortunately the disc does not have any bonus material.

Fazit: "Ideal Home - Ein Vater kommt selten allein" is a charming comedy that can stand up to all kinds of clichés with two great leading actors and lots of politically incorrect jokes. The Blu-ray shows the film in good picture and sound quality. Unfortunately there is no bonus material and no subtitles. All in all but still a clear one: Recommended!