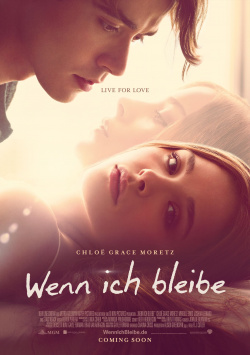 How fast life can take an unexpected direction: The biggest problems for Mia Hall (Chloë Grace Moretz) were whether she was accepted at the renowned Jouliard School in New York and an argument with her friend Adam (Jamie Blackley). But suddenly a car accident rips her out of her life. As her body struggles to survive in a coma, Mia's mind wanders through the hospital, observing her grieving relatives and friends and reviewing the past months. Is what she left after this accident enough to want to live on or is it time for Mia to let go?

"If I Stay" based on Gayle Forman's boy book bestseller of the same name. Director R.J. Cutler ("Nashville") has created a touching teen romance out of the original book, which at times bathes a little bit in kitsch, but also has a lot of nice and very emotional moments to offer. The tragic accident and its consequences are not really at the forefront of the story. Rather, it tells the love story of Mia and Adam, who were at an important crossroads at the time of the accident. And so the question arises: is Adam's insecure love enough to give Mia enough courage to live? Can he absorb the loss she's suffered? Can he at least give her the strength to find new courage to live again if she awakes from her coma?

The viewer can only guess at the end. But the tender romance that develops between the two over a period of several months suggests the strength of their love. Mia is a talented cellist who likes to listen to Beethoven and is more of an outsider, although her parents - her father (Joshua Leonard) was once a true rock musician and her mother (Mireille Enos) his biggest fan - are always anxious to make her a little looser. Only in the young musician Adam, who is about to make his breakthrough with his band, does she find a person with whom she really feels connected and who gets her out of her snail shell. This isn't always easy and also causes occasional crises - especially when Mia has to choose between her love for Adam and her passion for music.

This is a really nice story, but sometimes it pretends to be a bit more profound than it actually is. Mia's treatise, for example, on the fact that a cello is not a solo instrument, as she had previously believed, but can only unfold its full beauty in interaction with others, seems like a somewhat old-fashioned wisdom. But even if the staging as a whole remains rather superficial and undoes countless clichés, the whole thing is absolutely successful for the target group. Especially for young viewers "If I Stay" is actually the perfect movie for a date. Even though boys might find the sad romance rather uncool, this is the perfect opportunity for them to take their beloved in their arms and comfort them - because a few tears are guaranteed to flow. And for girls the story is really very well done, whereas the actors play an important role here as well.

Chloë Grace Moretz and Jamie Blackley in particular succeed very well in convincingly playing against the somewhat flat script. There is a believable and quite tingling chemistry between the two of them, so that they make a really cute couple, to whom one would wish that they stay together and become happy. This is actually crucial for the movie's success, as the whole thing stands and falls with the emotional bond of the audience. In addition to the two main characters, the supporting actors like Mireille Enos ("The Killing"), Joshua Leonard ("The Blair Witch Project"), Liana Liberato and the great Stacey Keach also make sure that the viewer feels and suffers with these characters. And that's exactly why "If I Stay" works very well overall despite all the clichés and superficialities. It is not a masterpiece, but as a gripping romance for a young target audience the film is without doubt: absolutely worth seeing!