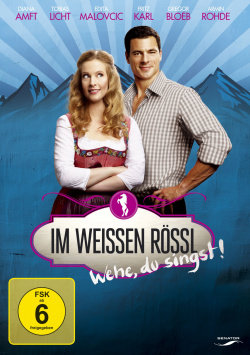 Film: Life doesn't mean well with Ottilie Giesecke (Diana Amft) from Berlin. Her boyfriend has just broken up with her in a rather unpleasant way and in a few days an important presentation will be ready to decide on her professional career. So it's no wonder Ottilie's nerves are shining right now. She can't really use the fact that her father Wilhelm (Armin Rohde) shows up unannounced and wants to persuade her to take a short trip to Lake Wolfgang. With a heavy heart Ottilie accepts the invitation and she is astonished when a short time later she finds herself in a world where the sky shows itself in the most kitschy blue and people sing their permanent happiness out into the world from the top of their lungs. When she meets the attractive Dr. Otto Seidler (Tobias Licht), he is so taken with Ottilie's rudeness that he proposes to her. For the big city girl this is the last proof that she has landed here in pure kitsch hell and is surrounded only by crazy people. But the more time she spends in the "Weißen Rössl", the more the pure lust for life, love and singing also colours Ottilie. And so it becomes part of a story in which it is not only about unfulfilled love, but also about the continued existence of the "horse"...

With "Im weißen Rössl - Wehe, du singst!" director Christian Theede dares to reinterpret Ralph Benatzky's popular singspiel from 1930, which in turn was based on a comedy from 1896. The play has already been filmed several times, with the adaptations from 1952 and 1960 with Peter Alexander in the leading role enjoying particular popularity. Thus a new filming of the material was a real risk in two respects. For one thing, singing games are simply no longer particularly popular in German cinema. Even large musical productions, which attract millions to the cinemas in the USA, have a hard time finding a broad audience in this country. On the other hand, a remake must inevitably compete with the other adaptations, especially for viewers who know and love other versions of the story.

>Thus it was definitely a good decision to give the film its own special touch by portraying the "White Horse", its guests and employees as well as the entire surroundings around Lake Wolfgang as a completely overstylised parallel world in which the characters are allowed to make fun of all the prejudices one might have about a musical Heimatfilm as changing clichés. But what makes this perfect world so beautiful for many is not disrespectfully pulled through the cocoa, but satirized with a loving bow. This is weird, kitschy and somehow also very funny.

The well known songs from the Singspiel were given a modern look and in addition musicians like Bela B. were allowed to contribute new songs to the melodic hustle and bustle. If this works, it's really good. But in many moments the staging isn't consequent enough, it just seems too well-behaved and a bit stuffy, which stands in clear contrast to the satirical tone of the story. In such moments Christian Theede doesn't seem to be able to decide whether he simply wants to present a modern homage or a persiflage.

However, even if the comedy would have done a bit more bite and a more determined production good, "Im weißen Rössl - Wehhe, du singst!" as a slightly trashy musical comedy is not without entertainment value. This is also due to the actors, who have coiled the well-known melodies out into the mountains with obvious fun. While Diana Amft can convince in the typical way with her slightly chaotic charm, Fritz Karl as head waiter Leopold in the role that made Peter Alexander so unforgettable is a real gain for the film. But also Tobis Licht, Edita Malovcic and Gregor Bloéb as the narcissistic Sigismund make sure that the good mood at Wolfgangsee triumphs over little moments of shame and embarrassment.

Sicherlich, "Im weißen Rössl - Wehhe, du singst!" is not a big head cinema and certainly not the big comedy the film could have been. But if you like German music movies and you like it a bit more silly, you might want to try this wacky version of the "Weißen Rössl".

Picture + Sound: The picture of the DVD pleases with its powerful coloring, which reflects the overstyled look of the movie very well. The sharpness of the image is at a very good level, especially in the brighter outdoor shots, and only shows minor weaknesses such as a slight blur effect in the detail display here and there. The sound is dominated by the dialogues and of course by the vocals. Nevertheless, the Dolby Digital 5.1 Mix is pleasantly dynamic. In addition to the conventional soundtrack, the DVD also has an audio film version for the visually impaired. Good!

Extras: As a bonus there is a quite extensive Making of (about 33:54 min.), as well as the most beautiful songs from the movie in karaoke mode to sing along (about 15:50 min.). The trailer and further program tips of the provider are also included in the additional package.

Fazit: "Im weißen Rössl - Wehe, du singst!" is an amusing new interpretation of Ralph Benatzky's popular sing-game, which with the courage to be silly and with a pinch of trash will keep you in a good mood. Anyone expecting a world comedy in the style of the 1960s version with Peter Alexander will probably be disappointed. But if you want to see a colourful film-musical spiced with self-irony and clamour, with good-humoured actors and some very catchy songs, you can definitely pay a visit to this "White Horse". The DVD presents the film in good picture and sound quality and also has a good making of to offer. Recommended