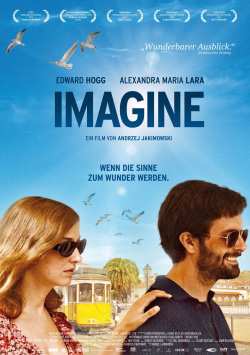 A renowned eye clinic in Lisbon seems to be the perfect place for Ian (Edward Hogg) to teach other blind people his very special ability: Ian has trained himself to orient himself only with the help of his hearing. He hardly ever uses a cane. Ian wants to help the young patients in the clinic discover the world around them in a whole new, exciting way. But the methods of the teacher quickly become a thorn in the side of the clinic management. They fear that Ian wants to endanger the young people in his care and insist that he adhere to conventional teaching methods. But especially the closed Eva (Alexandra Maria Lara) is convinced of Ian's abilities and gives him all her trust, hoping that he can show her the way out of her personal darkness…<x>N</Imagine" tells with very naturally acting actors and quiet humour about the power of the imagination, about the unshakeable will to free oneself from isolation and about the fear of many people of the new and unknown. The production by Andrzej Jakimowski ("Little Tricks") is pleasantly unobtrusive. She concentrates not only on the hesitantly developing friendship between Ian and Eva, but also on a vivid visual language and a carefully worked out sound design. Thus the filmmaker succeeds excellently in drawing the viewer into the story.

Not only the fact that the leading actor Edward Hogg was intensively introduced to the art of echo locating by the blind Alejandro Navas makes his play so believable. This is important because Ian is supposed to stand out somehow because of his methods, but still doesn't seem like a foreign body. And Hogg actually manages very well not to seem like a convulsively anxious actor between the 16 blind or visually impaired young people playing his students, which preserves the authentic atmosphere of the production.

The most dramaturgically interesting aspect is certainly the doubts and hostility Ian has to endure because of his use of echo locating. This even goes so far as to raise doubts that he is really blind. And the more Ian tries to open his disciples to the world, the more he catapults himself to the sidelines. From this situation the movie draws a lot of emotional power and also a certain tension. However, this is opposed by a very calm narrative style that is sometimes a bit too carried. While for some viewers this gives the visual language the opportunity to fully unfold, for others it could also be seen as tough and boring. Therefore there should be a penchant for stories told in a worn way and quiet stagings, in order to really enjoy "Imagine".

Only then can the poetic level of the also superficially beautiful story fully come to bear, whereby some of the quite existing lengths are also largely eliminated. Therefore: a beautiful, sometimes poetic, then again humorous film, which can be recommended to all lovers of quiet Arthaus food. Worth seeing