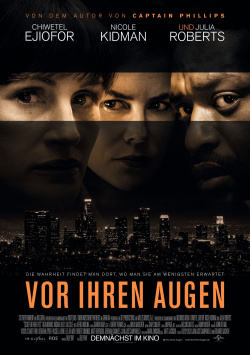 In front of her eyes

It was one of the most tragic cases in the career of FBI agent Ray (Chiwetel Ejiofor) when of all people the daughter of his partner Jess (Julia Roberts) was brutally murdered. Together with his colleagues and the responsible public prosecutor Claire (Nicole Kidman) Ray quickly succeeds in catching the suspect. But for lack of evidence, he cannot be charged. 13 years later, Ray left the FBI long ago, but that one case never let him go. Desperately, he was looking for the unsub all the time. Now he thinks he's found him again. With these insights he returns to Claire and Jess so that they can all finally draw a line under this case…

"Before their eyes" is the American remake of the Argentine Oscar winner "In their eyes" by Juan José Campanella from 2009. Campanella's movie is an almost perfect mix of drama and thriller, which is so universally good that it actually doesn't need a remake. There's no better way to tell this story. Director and scriptwriter Billy Ray were well aware of this. That's why he didn't even try to tell a better version of the story, but rather a different one. And that makes this US remake very interesting in a way.

The beginning is promising. The film starts in an America marked by paranoia and fear after the attacks of September 11, 2011. The discovery of a body near a mosque is a particularly sensitive matter for the FBI. The director has done a very good job of tracing how easily the tempers are boiling over. The scene in which Ray recognizes his partner's daughter in the dead girl and her reaction to her is an extremely intense moment, which is staged in an oppressive way and played magnificently. Here the remake reveals its very own strengths, which Billy Ray would have had to play out even more in order to be able to convince all along the line.

But unfortunately he doesn't succeed. For example, the storyline about the unfulfilled love between the investigator and the prosecutor cannot unfold the same emotional power as in the original. There is simply no real chemistry between Chiwetel Ejiofor and Nicole Kidman that would make such big feelings credible. Both play well on their own, but together it just doesn't work. Julia Roberts delivers a very strong performance, but in many scenes she stays too much in the background or doesn't appear at all, so that she can't expand her role as she would have had to in the end.

In the end, Ray seems to find his way back into the track and reach the intensity that characterizes the film at the beginning. But then he varies the end of the original in one crucial point. In a way, this is understandable and consistent with the changes he has made to history as a whole. Nevertheless, he takes away exactly what made Campanella's film so unique and what gave it such a lasting effect. It's really just a tiny change, but it has a big effect on the overall picture.

"Before Their Eyes" isn't a bad movie, but for connoisseurs of the original, despite many impulses of their own, it's completely unnecessary. However, if you don't know the Argentinean movie and want to see a thriller drama in the cinema that is thrilling but rather calmly told, you can watch this neat, but not great remake. Worth seeing with small concessions!