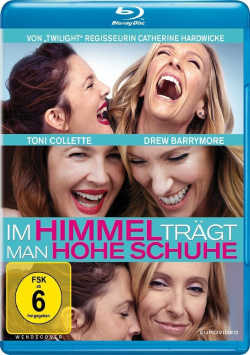 Film: Since their childhood Jess (Drew Barrymore) and Milly (Toni Collette) are best friends. They just share everything and go through thick and thin together. But then their friendship is put to a hard test when career woman Milly learns that she has breast cancer. Of course her husband Kit (Dominic Cooper) and her children stand by Milly in these difficult times. But now she needs one thing above all else: Jess! With her positive, down-to-earth character and her unshakeable sense of humour, she is now Milly's rock in the surf. But Jess and her boyfriend Jago (Paddy Considine) also have a life of their own in which they try to fulfill the dream of a child together. To be a self-sacrificing girlfriend and at the same time fulfil her dream of having her own little family is sometimes just too much for Jess. And this has serious consequences for the actually unshakeable friendship between the two friends…

With "In heaven you wear high shoes". director Catherine Hardwicke clearly distances herself from the "Twilight" world, which brought her her biggest commercial success so far in 2008 and in which she also moved with the weak Little Red Riding Hood variant. Now she presents a relatively adult women's film, whose trailer suggested a collection of terrible clichés and unspeakable kitsch. But fortunately this impression does not do justice to the drama. Because "In heaven one wears high shoes" is clearly better than this short preview or the stupid German title let fear. The fact that the story works well over long stretches is not only due to the good chemistry between Drew Barrymore and Toni Collette, both of whom deliver well adapted portrayals for their role types. The game of the two Golden Globe winners doesn't offer any real surprises, but it works really well in its own way.

The way Hardwicke portrays the two men alongside their main characters is surprising. Kit and Jago are very interesting and multi-layered characters, who are given enough room to fully unfold in some small, really wonderful scenes. Fortunately, these secondary characters don't degenerate into the stereotypes that are so popular in movies of this genre. Surely, here Hardwicke could have gotten more out of it without pushing the two women into the background. However, even though the full potential of the good dynamics between the characters wasn't used, the reduced form of the movie still contributes a lot to the fact that this movie works despite a lot of clichés and even feels really authentic at times.

The course of history up to the inevitable end of the handkerchief is of course extremely predictable. Who doesn't already know at the opening credits how the whole thing will end probably has never seen a movie of this genre before. Moreover, at the end the film is applied quite thickly, in order not to release anyone with dry eyes from the film. It's highly manipulative and extremely kitschy. And yet it works really well for the target audience. Catherine Hardwicke has staged a really nice women's film that best friends can watch together to laugh and cry together - and maybe even to recognize each other here and there. This is not a great art cinema, not a work for eternity. But for a nice evening among friends it is enough and for that there is a deserved one: Worth seeing!

Picture + sound: There is nothing wrong with the technical implementation. The sometimes somewhat artificial, very warm colour scheme, which gives the film its very special atmosphere, as well as the good sharpness of detail ensure that the visual implementation leaves an all-round positive impression. For a small drama like this not uncommon the sound is rather reserved. Big surround moments shouldn't be expected. However, the dialogues and the soundtrack are well coordinated, which is why there is a contented "good" here as well.

Fazit: "In heaven you wear high heels" is a charming women's film that sometimes makes you laugh and sometimes makes you cry, but always entertains you well. Well-written dialogues and sympathetically drawn characters comfort the listener beyond many clichés. The Blu-ray presents the film in good picture and sound quality. In addition, the disc offers almost 40 minutes of extras. All in all, a clear case of: Recommended