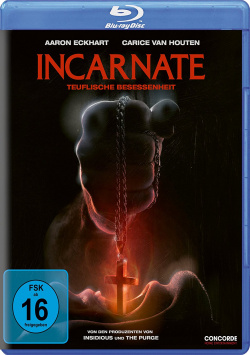 Movie: Dr. Ember (Aaron Eckhart) has an unusual gift: he can penetrate into the minds of people who are possessed by a demon - or as Ember calls it, by an "unclean spirit" - and from there drive out the dark power. This costs him a lot of strength and is not harmless, but has always been successful so far. However, Ember also pursues a very personal agenda: he seeks the demon, whom he blames for the death of his wife and child. And in fact he seems to have reappeared now, in the body of the boy Cameron (David Mazouz) of all people. Now Ember faces his biggest challenge - he has to save the boy and destroy the demon who destroyed his life…

Director Brad Peyton ("San Andreas") has chosen a not uninteresting exorcism variant with "Incarnate": His mixture of "The Exorcist" and "Inception" has some really good ideas to offer. That one can penetrate into the mind of an obsessed person and see how the demon manipulates his host is a pleasantly original idea. The demon quietens his victim by seemingly fulfilling his or her most desires. The boundaries between reality and deception become blurred again and again, which gives the whole a decent potential for tension. In addition, Peyton succeed in creating a few good shock effects, especially at the beginning, which create a pleasant horror.

With Aaron Eckhart ("The Dark Knight"), Carice van Houten ("Game of Thrones") and Catalina Sandino Moreno ("Che", "A most violent year") the film is also quite well cast, which sets it apart from many other works of this genre. Due to the basic idea, the at times atmospherically very well done staging and the good cast "Incarnate" has a very good potential, which isn't always used adequately, though. Especially towards the end Peyton too often falls into all too obvious cliché traps and unfortunately leaves the chance to leave a lasting impression at the finale unused.

It is a pity that the end is too conventional and smooth. Because that's not what it looks like until just before. However, even if this might be a bit disappointing, the movie can still leave a good impression overall. Even though it only rarely gets really creepy, the movie is at least never lengthy, but actually always entertaining and pleasantly thrilling. And for that there is a deserved one: Worth seeing!

Picture + sound: The Blu-Ray image has a very good overall sharpness, which brings out even smaller details in the many dark scenes. The colour scheme underlines the gloomy look of the film and can well capture the demonic atmosphere. The DTS-HD MA 5.1 Mix provides pleasant movement on the surround channels, especially with well-placed shock moments, but at the same time transports the dialogues out of the speakers in a way that is easy to understand. Good.

Fazit: "Incarnate" approaches the genre of exorcism horror with a rather original approach. Even though not all the potential that this well done basic idea offers is used, Brad Peyton has staged a decent and quite thrilling demon thriller that presents itself on Blu-ray in good picture and sound quality. The only thing the viewer has to do without is bonus material. Altogether there is a satisfied one for this disc: Recommended!