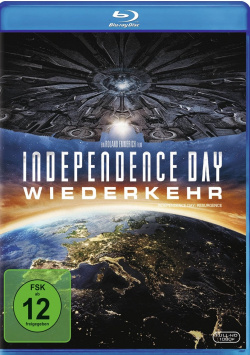 Film: It is now 20 years ago that the aliens attacked our earth and almost exterminated mankind. But the invasion could be fended off successfully. The survivors rebuilt the cities, buried old conflicts and formed an international alliance to protect themselves from future attacks with the help of alien technology. But the aliens also had two decades to prepare revenge for their defeat. And so they return with an even larger mother ship and even more deadly weapons to destroy humanity once and for all. Scientist David Levinson (Jeff Goldblum), who was instrumental in saving Earth during the first alien invasion, must now join forces again with a group of intrepid fighters to defeat the interstellar enemy. But this time he seems to have all the trumps in his hand…

Again and again there were rumors that Roland Emmerich would continue his blockbuster of 1996. But only twenty years after the first alien invasion does the "Master of Disaster" make it really crack again. With "Independence Day: Wiederkehr" he tries to satisfy all fans of the original and at the same time to inspire a whole new generation of cinema-goers. Did he succeed? There's a very clear one for that: Yes! First of all it has to be made clear that "Independence Day" wasn't a really good movie. It was perfect popcorn entertainment with high fun factor, no question. The film had some pictures to offer that were really spectacular for its time. But with the best will in the world, you can't call the strip really good. And that's what someone says who has watched the film several times in the cinema, bought the VHS and later the DVD. I loved the first movie for what it was: entertaining food for the eye, where the brain functions can be reduced to the bare essentials. And that's exactly why I didn't expect the sequel to be a genre milestone. Rather, I assumed that we would be offered a technically more impressive spectacle with a similarly high fun factor as the first album. And that is what Emmerich delivers by and large.

This is dramaturgically not really logical and certainly not well written. The dialogues are sometimes really grottig and the figures absolutely clichéd drawn. You have to be able to get involved to have fun with this new alien attack. But even then there are some unmistakable points of criticism that prevent the wow effect from being achieved here once again, with which Part 1 attracted over 9 million visitors to German cinemas twenty years ago. The film lacks such fascinating images as those of the spaceships that penetrate the Earth's atmosphere and float above the major cities of the world. These are images that, despite outdated effects, still function after twenty years. In his effort to make everything bigger, faster and more spectacular in lap 2, Emmerich did not manage to create similarly memorable images. The arrival of the aliens and the first big attack consist of more interchangeable CGI sequences, which could also come from a "Transformers" movie or a similar effects overkill.

If all effects could convince, it might not even be so bad. But with some sequences the green screen effects are so obvious that one wonders if the makers ran out of money here. And then there are those moments in which it also reveals itself what kind of nonsense has actually been tapped here. It's still fun, but it also provides some moments of extreme eye twisting that might have prevented better effects.

There is hardly anything to be said about the actors, because they have only little room to unfold. The script just isn't good enough for that. While many people just seem to stick to the direction "open your eyes and mouth and look up at the sky", experienced people like Jeff Goldblum or Bill Pullman only drive on autopilot. But also here applies: Whoever expected a great acting cinema, is unfortunately to blame after the experiences from part 1! Anyone who is upset about the fact that the USA is once again being celebrated as the saviour of the world should take a deep breath, then think about what kind of film they have just seen and simply accept it for what it is: harmless, entertaining popcorn entertainment. What's really unfortunate is that the sequel lacks the special that made the first part a kind of classic. The film is nice to watch and sometimes (not always intended) very funny, but nothing more - and for that there is a decent one: Worth seeing!

Picture + sound: That was not to be expected with a current blockbuster actually differently: The picture is absolutely clean and the colors very atmospherically mixed. The image sharpness is also of a very high level and allows even the smallest details to come into their own during the alien attacks. Moreover, the 2D version Films also has a pleasant image depth, which comes into its own especially in the destruction sequences. The powerful and very lively sound mix is also convincing all along the line. Numerous sound effects ensure that the surround channels are almost completely in use. All in all, there's a deserved one here: Very good!

Extras: The bonus material starts with an audio commentary, which proves once again that Roland Emmerich's strengths do not necessarily lie in the pronunciation of these comments. In many sequences Emmerich only describes what you get to see at the moment and unfortunately there is hardly any really interesting information about the making of the movie. This can be found in the neat Making of (ca. 55:25 min.), which however also deals with the content a bit too detailed, which wouldn't have been really necessary after viewing the film. The Blu-ray also has a (fictitious) TV report about the "War of 1996" (approx. 5:11 min.) and another fictitious report from breakfast television (approx. 3:07 min.) on board. Eight omitted scenes (approx. 8:24 min.), which can optionally be viewed with audio commentary, a few outtakes (approx. 6:14 min.) and design concepts round off the additional offer of the disc.

Fazit: "Independence Day: Wiederkehr" unfortunately doesn't have the big wow effect of the first part anymore and doesn't offer more than harmless popcorn entertainment, where you shouldn't put too much emphasis on dialogues and convincing actors. Altogether a nice continuation with some good show values, but unfortunately not more. The Blu-ray is technically fully convincing. The bonus material is okay, but at times it suffers too much from its promo character. But there is still a good one for the disc: Recommended!