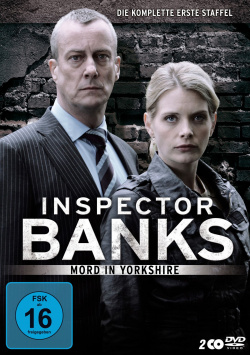 Film: Already in 1987 Detective Chief Inspector Alan Banks and his team solved his first case. Conceived by the British writer Peter Robinson, Banks went on a gangster hunt in Yorkshire, the home of his literary creator, in several successful stories in the following years. The fictional city of Eastvale, in which the crime novels are set, was inspired by various real locations. After 25 books, the time was ripe for Inspector Banks to also ensure law and order on the TV screens.

After a successful pilot, "Inspector Banks - Murder in Yorkshire" went into series production in 2011. Robinson was also allowed to see for himself on the set whether his original is also adequately implemented and seems to be absolutely satisfied with the result. And he can, too, because the first four cases of Inspector Banks, very charismatically embodied by Stephen Tompkinson, offer the best crime entertainment. Banks and his team are much gloomier than his British colleagues Barnaby and Lewis. Nevertheless, there is always some room for relaxed moments.

The dynamic between Banks and his new colleague Annie Cabbot (Andrea Lowe) has a very special charm, as the sexual tension between the two, which is expressed in loving teasing, does not necessarily prevail. Rather, two distinct egos meet here, which sometimes lie completely on the same wavelength and then again seem so completely incompatible with each other. But also the rest of the team fits very well into the stories. Even if the figures are not drawn as carefully as Banks and Cabbot, they never seem superficial or completely interchangeable.

What also makes the series interesting is that you look at Banks, that the work doesn't leave him cold. Stephen Tompkinson really shows very well how he deals with the fact that some crime scenes really stir him up. "Inspector Banks - Murder in Yorkshire" suffers from a few short lengths and fans of other British crime series may miss the dry British humour that is so often used. Nevertheless, at the end a very positive overall impression prevails, which makes you want to see more film versions of the popular novel character.

The consequences in detail:

In a small town in East Yorkshire five young girls disappeared without a trace. The residents are in a state of alarm. One night, police officers Janet Taylor and Dennis Morrisey are alerted to a suspected family dispute at the Payne couple's home. In the hallway the two find the unconscious Lucy Payne with a severe head injury on the floor and it gets even worse: When Taylor and Morrisey discover the strangled corpse of a young woman in the cellar, a man with a machete attacks the law enforcement officers. After he fatally injures Morrisey, his colleague Taylor manages to overpower the aggressive perpetrator with her baton. Chief Inspector Alan Banks cannot question the coma-stricken perpetrator, it is Marcus Payne, but the four corpses of blond women with traces of abuse suggest a serial perpetrator. Of the fifth missing girl, Leanne Wray, every trace is still missing.

Banks hopes that she is still alive and does everything to find her again. The young and determined Annie Cabbot from the internal supervision feels that the investigator is under pressure every step of the way. After a complaint by Payne's doctor, Cabbot is now to find out whether Taylor really applied the harshness offered by purely official self-defence when he was arrested. The suspect's wife, Lucy Payne, is also no help to Banks in the search because she pretends not to have known anything about her husband's cruel crimes. (Text: arte)

No smoke without fire

The fire on a boat puzzles Banks and his team because there are two victims between whom there seems to be no connection. Leslie Whitaker, an antique dealer, burns to death in his boat. Turns out the fire was set deliberately. In the boat, DCI Banks (Stephen Tompkinson) and his team find a painting by William Turner and a large sum of cash. Was it about art fraud? In order to obtain an expertise, DS Cabbot (Andrea Lowe) visits the art historian Mark Keane (John Light). When Christina Aspern's body is washed ashore a short time later, Banks and his team are faced with a mystery because there is no discernible connection between the two victims. (Text: ZDFneo)

A rape leads Banks and his team to a case from the past. After a night of drinking Hayley Daniels is found dead in the storeroom of souvenir shop owner Timothy Randall (Ian Bartholomhew). Turns out Haley was raped. Since Randall made false statements regarding the corpse find, he quickly gets under suspicion. Annie Cabbot (Andrea Lowe) gets her first murder case as a lead investigator. She has to solve the murder of Karen Drew, who was completely disfigured after an accident. At the crime scene she is reminded of a past case, and it turns out that the murder victim Karen Drew is also an old acquaintance of Banks (Stephen Tompkinson) and Cabbot. (Text: ZDFneo)

Cold as the grave

An armed robbery gives DS Cabbot puzzles, because apparently it was only about an old van. Banks is being asked for a favor by Chief Superintendent Rydell. Tony Grimes (James Boyland) is knocked down in front of a bar and his car is stolen. The culprit is the petty criminal Charlie McKay (Sam Chapman). When DS Cabbot (Andrea Lowe) and DC Blackstone (Jack Deam) try to confront him, they find him dead. Everything points to the deed of a gang. Rydell (Colin Tierney) asks Banks (Stephen Tompkinson) to go to London to look for his daughter Emily (Scarlett Patterson). Banks finds them in the house of Barry Clough (Terence Maynard), an unscrupulous club owner. Shortly after Banks has brought her back home, she disappears again. Did she know too much about Clough? (Text: ZDFneo)

Picture + Sound: The picture reproduces the drab, rather gloomy atmosphere of the detective stories well through a harmonious, somewhat reduced color scheme. The picture sharpness in the brighter scenes is on a good TV level, in the darker scenes, on the other hand, some minor blurring and slight picture noise are noticeable. The sound available in Dolby Digital 5.1 offers only a few real surround moments. On the other hand, the dialogues sound clear and easy to understand from the home cinema boxes and the rather reserved soundtrack also creates a fitting atmosphere. Good!

Extras: Unfortunately the first season doesn't have any bonus material.

Fazit: "Inspector Banks - Murder in Yorkshire" is an exciting, dark crime series from Great Britain, which pleases with a great main character, a good character development, rousing cases and a very atmospheric look. Even though there is a lack of loosening up humor and the DVD has no additional material to offer, the first four cases of the investigator from Yorkshire can be warmly recommended to lovers of British crime food. Recommended]